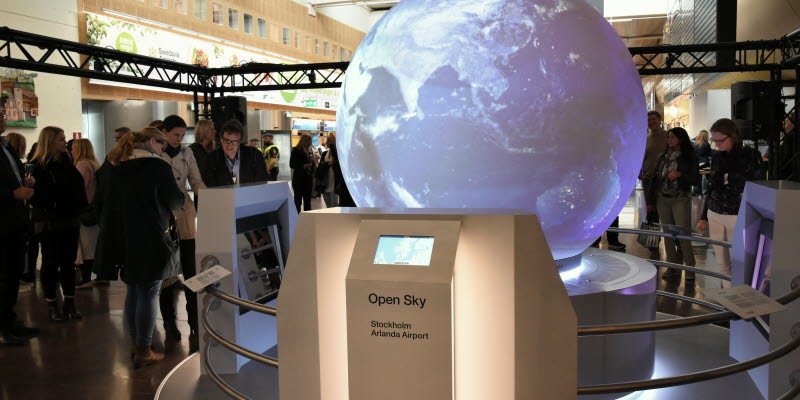 To highlight the large number of destinations that can be reached non-stop from the airport, a new installation – Open Sky – is being inaugurated at Stockholm Arlanda Airport. Using projection mapping, data from the live flight tracker Flightradar24 is projected three-dimensionally onto a globe two metres in diameter, showing air traffic to and from Stockholm Arlanda in real time. The idea is for the installation to be an interesting meeting place for passengers in the Terminal 5 departure hall.

Flightradar24 is a flight tracking service that receives information about the position, altitude and speed of more than 150 000 aircraft each day via their ADS-B signals. Projection mapping is a technology used to project images and video on irregularly shaped objects. Using data from Flightradar24, all aircraft that take off and land at Stockholm Arlanda or are en route to one of the destinations that can be reached by non-stop service from the airport are shown.

“We are really pleased to be part of this project. Like Stockholm Arlanda, Flightradar24 is a complex traffic machine that involves the interaction of thousands of different systems, functions and, not least, people. Through a network of what are known as ADS-B receivers, which cover large parts of the globe, we can pick up the aircraft’s signals and essentially follow all air traffic in the world live,” says Fredrik Lindahl, chief executive of Flightradar24.

Stockholm Arlanda’s passenger volume has increased 30 per cent since 2010, and currently more than 160 destinations can be reached from Stockholm Arlanda. That number is constantly increasing. Just last year, 47 new air links to and from the airport were added.

This is the first time ever that three-dimensional projection mapping technology is being used in a public airport environment. Open Sky is located in the Terminal 5 departure hall and will be a permanent installation at Stockholm Arlanda.