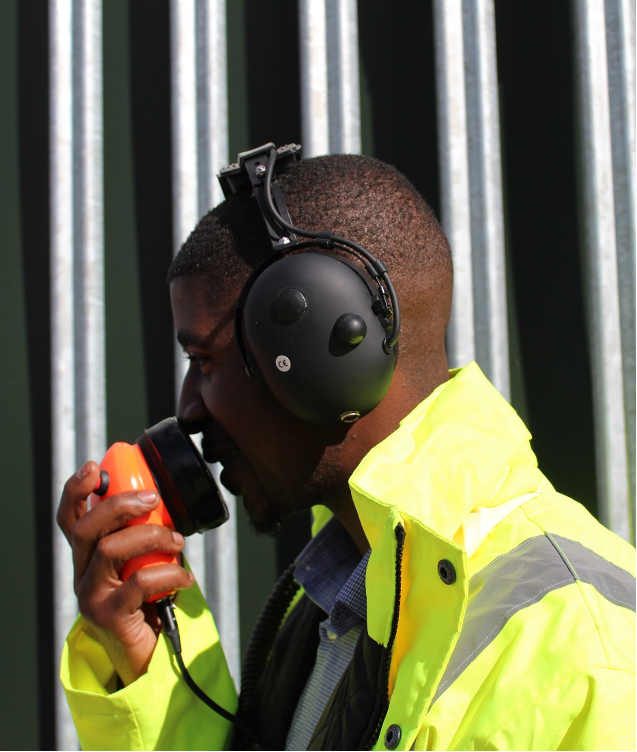 BFS currently has a total of 20 Minerva Ajax headsets. It initially took a tranche of 10, and ordered a further 10 soon afterwards.

BFS initially acquired the Minerva system in its boom microphone variant but found that, on occasion, the noise of an aircraft engine – if the crew had fired up   the engines during pushback contrary to usual policy – could be heard through the pushback controller’s mic and therefore  caused a problem for the flight crew trying to hear a handler’s voice.

The problem was more noticeable for narrow body pushbacks where the pushback controller would be closer to the aircraft than in the case of a wide body pushback, and BFS handles a lot of narrow bodies in the course of its work.

Hence the ground services provider switched to the Minerva Ajax headset variant with a mouth shield, or closed cup, that can be used in higher noise environments for aircraft pushback, where background noise needs reducing.

Temple first saw the system at an industry event a few years ago and was impressed with the dBD Communications system.

He was even more impressed when managing director David O’Connell visited Suvarnabhumi to demonstrate the   system’s value and to show just how well it could work as part of BFS’s day-to-day operations. “He made sure that it was exactly what we required,” Temple recalls.

Plus, on the rare occasion when a headset has needed repair, the after-sales service provided by dBD Communications has been excellent, he says.

Minerva Ajax has been well received and proved its worth, Temple continues. As a wireless system, it enables handlers

to move freely without being restricted by any cable. That means the BFS pushback controller can always maintain a completely safe distance from any potential hazard and can always perform a full aircraft walkaround as necessary with no encumbrance from a communications cable.

Another safety benefit of a wireless communications system is important at a place like Bangkok, where thunderstorms are not rare and lighting comes with the territory. It is not unknown for handlers to receive a small shock through a wired system if lightning strikes close by, and this problem is averted with a wireless system such as Minerva Ajax.