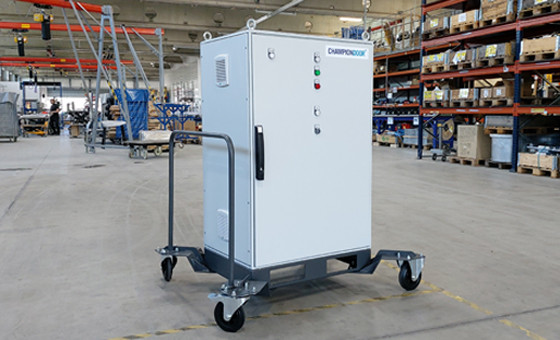 “With our new battery-powered hydraulic emergency opening system, the customer’s door can be opened in any situation. Particularly in the airplane industry, it is important that, for example, fighter jets costing billions can’t get out of the hangar when a real situation arises. Even in a factory, the entire production may stop if the goods cannot be transferred in and out of the door.”

The system can be installed into every door made by Champion Door. The equipment is dimensioned according to the size of the doors.

“We have provided an emergency opening system to a door of up to 21 meters in height.”

The system is attached to the door in minutes.

According to Sikala, the development of the new system originated from the customers’ needs. The first version of the system was fixed – it was installed directly into each door. Soon, however, sites with more doors began to come up.

“We wanted to meet our customers’ needs and develop the solution as efficiently and inexpensively as possible. So we further processed the product to be portable. As a result, our emergency opening system can be attached to the very door where it is needed. The attachment occurs in minutes.”

According to Sikala, the emergency opening system does not require, for example, customizations or a special power supply from the customer. The system is about a square meter in size and is stored at the charging station. Therefore, the customer needs only to keep an eye on the system’s battery condition.

“In the latest versions, we have installed a sensor that monitors the battery condition. The detector indicates the battery’s condition either with the indicator light on the cabinet cover or via Bluetooth directly to the customer’s phone.”

“Even one operating time pays back the purchase price many times over.”

Champion Door’s emergency opening system is exceptional in technology. Sikala has not encountered a similar system anywhere. Its benefits to the customer are undeniable.

“One use in the airplane industry, for example, costs the purchase price many times over. Savings can be hundreds of thousands of euros.”