Helsinki-Vantaa Airport or simply Helsinki Airport, is the main international airport of the city of Helsinki, its surrounding metropolitan area, and the Uusimaa region. The airport is located in the neighboring city of Vantaa, about 5 kilometres west of Tikkurila, the administrative center of Vantaa and 9.2 NM north of Helsinki city center. The airport is operated by state-owned Finavia.

The airport is by far the busiest in Finland (with 20 times the traffic of the next-busiest, Oulu) and the fourth busiest in the Nordic countries in terms of passenger numbers. About 90% of Finland’s international air traffic passes through Helsinki Airport.

The airport is the main hub for Finnair, the flag carrier of Finland, and its subsidiary Nordic Regional Airlines. It is also a hub for CityJet (on behalf of SAS) and an operating base for Jet Time, Norwegian Air Shuttle, SunClass Airlines and TUI fly Nordic. Helsinki Airport has around 50 regularly-operating airlines. The airport has around 80 scheduled destinations to other parts of Europe and 21 direct long-haul routes to Asia, the Middle East, and North America. There are also 35 charter destinations including numerous long-haul charter destinations. Currently, Helsinki Airport has two terminals with a total of 50 gates with jet bridges and 80 remote aircraft parking stands.

Originally built for the 1952 Summer Olympics in Helsinki, the airport today provides jobs for 25,000 people and there are 1,500 companies that operate at this airport.

In 70 years, Helsinki Airport has grown from a simple airport built in a formerly wooded area into one of the world’s leading airports in terms of its service quality. Located in Vantaa, the airport was …
Read More

Finavia has been developing the restaurant services on offer in the new expanded terminal at Helsinki Airport. On 9 May, a restaurant world with six different kitchens opened in the new arrivals hall, serving all …
Read More

The airport company Finavia will introduce next generation technology at Helsinki Airport to make security control quicker and easier. All flights will be centralised in one terminal, and the current Terminals 1 and 2 will …
Read More

Moomin Shop, loved by families with children, now serves you in Helsinki Airport’s new arrivals hall and at Gate 40 after the passport control. Moomin Shop, which used to operate in the Schengen gate area, now …
Read More 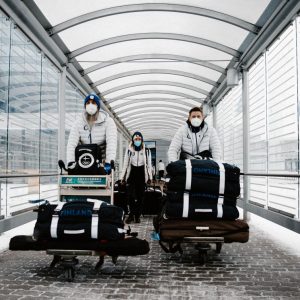 Finavia sees off the Finnish Olympic Team at Helsinki Airport

Team Finland’s journey to the 2022 Winter Olympics in Beijing has begun. The first athletes and their support teams departed from Helsinki Airport on Wednesday, 26 January. In total, more than 100 Finnish athletes will …
Read More

The busy travel season, checking of COVID-19 documents and reintroduction of internal border controls will cause queues at Helsinki Airport and Lapland airports during the weekend of 7–9 January. The busiest travel times by airport are …
Read More

Finland’s biggest airport names itself after all its visitors

Traditionally, airports around the world have been named in the honor of great men of the past. Now, Helsinki Airport is naming itself after all its visitors to show its dedication to its passengers and …
Read More

The new Terminal 2 extension of Helsinki Airport will open to passengers today, Wednesday 1 December. On the opening day, passengers travelling through the airport will be greeted with small festivities in the departures and …
Read More

The Helsinki Airport development programme project has received the RIL Award 2021 presented by the Finnish Association of Civil Engineers RIL. This award is presented annually to the construction work, site or concept that best …
Read More

The new and shiny extension of Terminal 2 will open on 1 December 2021. In addition to the impressive main entrance and departures hall, the arrivals hall will also be opened. In the hall, the …
Read More

At Helsinki Airport, the handrails of escalators will pass through a disinfection machine in the future. Finavia is installing Kone disinfection devices on the escalators of the Terminal 2 extension, which opens on 1 December …
Read More

Finavia has been awarded the international BREEAM certification as proof of the development programme's comprehensive sustainability work concerning the expansion of the long-haul flight area. The development of Aukio and the West Pier as part …
Read More

Finavia and The Nordic Investment Bank (NIB) have signed a 15-year loan agreement of EUR 25 million to finance the fourth and final phase of the strategic investment programme, which includes the extension of the …
Read More

The domestic content of the Helsinki Airport Development Programme is 90%

– The Helsinki Airport Development Programme has been carried out using mostly domestic materials and labour. The spectacular wooden ceiling of the Terminal 2 extension is a unique example of Finnish carpentry. Finnishness is the common thread …
Read More
Helsinki Airport
01531 Vantaa
Finland
Add Your Company
to accept our Privacy Statement