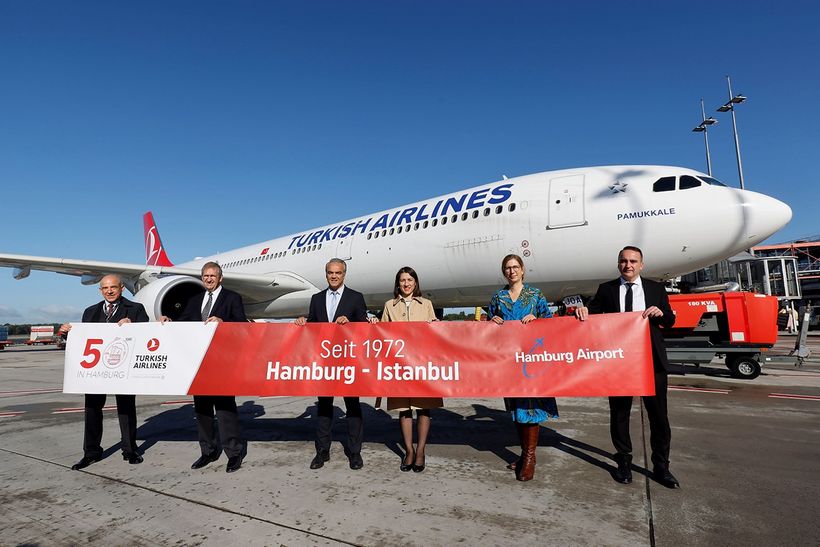 Growth of a successful partnership: from one Istanbul flight to the largest provider of flights to Turkey from Hamburg Airport

It is 50 years since Turkish Airlines flew the Hamburg – Istanbul route for the first time. Since then, the airline has grown to become the biggest provider of flights to Turkey from Hamburg. Turkish Airlines offers north German passengers a varied mix of holiday and business destinations as well as flights that are primarily popular for visiting friends and relatives. Turkish Airlines flies year-round to these, the two most important commercial airports in Istanbul, which serve the airline as international hubs. In the summer timetable period, Turkish Airlines also flies to Antalya, Ankara and other seasonal destinations. During the coronavirus crisis, Turkish Airlines was one of the first carriers to ramp its flight schedule up again, demonstrating its special connection with Hamburg.

On the occasion of the 50th anniversary of their partnership, Hamburg Airport and Turkish Airlines held a special celebration at the airport. As part of the celebration, Michael Eggenschwiler, CEO of Hamburg Airport, Nurullah Oguz, Director of Turkish Airlines in Hamburg, Dr Judith Reuter, Head of the Aviation Department in the Hamburg Ministry of Economic Affairs and Innovation, and Emine Derya Kara, Consul General of the Republic of Turkey in Hamburg, formally welcomed an Airbus A330 flying the jubilee route, Istanbul – Hamburg. The service to Istanbul is still in strong demand today – not just for holidays in Turkey and those doing business on the Bosporus, but also as an international hub, for example for flights to Asia and Africa. Turkish Airlines carries passengers from northern Germany to a multitude of intercontinental destinations all year round.

“A business partnership that lasts for 50 years is not to be taken for granted. The Hamburg – Istanbul route launched a genuine success story. Demand is strong all year round for the flights offered by Turkish Airlines, and Hamburg’s route network is inconceivable without them,” says Michael Eggenschwiler, CEO of Hamburg Airport. “Turkish Airlines was one of the first carriers to resume operations during the pandemic crisis, successively increasing frequencies. This courage paid off. Measured by passenger numbers, Turkish Airlines developed into the fifth largest airline in Hamburg last year. At the same time, this commitment demonstrates once again the importance of Hamburg. And we know that we have a forward-looking partner by our side in the form of Turkish Airlines, a partner that depends on modern, efficient aircraft such as the Airbus A321neo, Airbus A350 and Boeing 737 Max. As the first CO2-neutral commercial airport in Germany, we are very happy to see this.”

“We at Turkish Airlines are delighted to have been at Hamburg Airport with our Istanbul services for 50 years now, and we are proud to have offered people in Hamburg and the entire region pleasant and comfortable flights from the city to Turkey for several decades, especially with the onbound flights to destinations around the world via our Istanbul hub,” says Nurullah Oguz, Director of Turkish Airlines in Hamburg.

The airline has two year-round destinations in its timetable: Istanbul (IST) and Istanbul Sabiha Gökçen (SAW). In summer, there are also flights to Ankara and Antalya, one of the most popular holiday destinations for north Germans. On top of this, the airline traditionally intensifies its focus on the family visit market from June to August, with a diverse range of seasonal services to other Turkish airports. During the 2022 summer season there were six seasonal destinations, including Ordu, Kayseri and Adana. This diverse and demand-driven range of flights ensures a valuable market share for the airline. Of the total of around 800,000 passengers who travelled to Turkey or returned to Hamburg between January and August 2022, around 43 percent flew with Turkish Airlines, including passengers continuing on to a long-haul connection via Istanbul.

Turkey more popular than ever as tourist destination

Since the first Turkish Airlines flight landed in Hamburg in 1972, Turkey has become one of the most popular destination countries for north Germans, and the target market also includes business travellers. During the coronavirus crisis, Turkey’s importance in Hamburg’s route network grew even further when a good and reliable service was on offer again so quickly. As one of the first airlines to resume services, Turkish Airlines was a major contributor to this development.