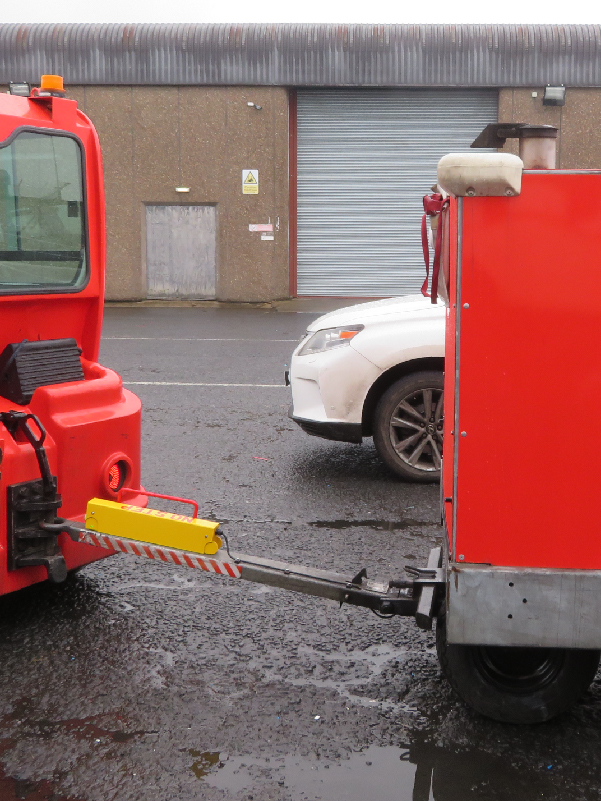 DHSL was asked to find a solution to repeated damage cost and downtime caused by operator’s failure to remove Ground Power Unit (GPU) power cables that are attached to Aircraft (AC).
We tested many types of interlock and found the following method the most satisfactory operation from a practical and safety point.
The patented Tow-Blok® unit is wired into a system appropriate 12vdc or 24vdc source on the GPU. There is a wiring schematic to assist with the connections.

The principal of operation is that when the GPU supply cable is stowed, the cable plug slots into a metal socket receiver, mounted in the cable stow area that has a lever operated switch attached. In the stowed position, the body of the plug actuates the lever switch. This action maintains a power source to a linear actuator that retracts a piston to a tow eye open position. When the cable is removed from the receiver, the lever operated switch will actuate and energise a relay that will send a signal to the actuator which will extend the piston to block the tow eye, preventing a tow pin attachment to a towing vehicle.

A specific feature of the Tow-Blok® is that a voice command will inform operators of actuation of device and if the cable is not in the stowed position. There are also LED lamps within the acrylic actuation rod and pylon mounted on the top of the GPU canopy to indicate the status of the Tow-Blok® device.

Further benefits include the following;