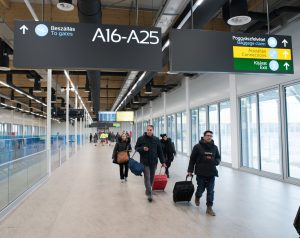 The Pier 1 facility which opened on January 15th is the first of a two-phase programme which will see demountable terminals providing over 11,000 square metres of additional space where passengers can board flights in comfort. Pier 1 with heated and air-conditioned floor-space incorporates a passenger hall with eight boarding gates that are directly connected to the aircraft stands plus six bus gates.

The second phase of Pier 1 will be linked to a Central Hall also supplied by Neptunus that will cover 6,700 square metres and is due to be open in time for the summer 2020 season. The Central Hall will feature resting and waiting areas, a food and beverage outlet, two additional large toilet blocks and a smokers’ terrace. Passengers will enjoy seamless passage from check-in to boarding, via air-conditioned corridors, escalators, and elevators linking the demountable buildings with the main terminal building. 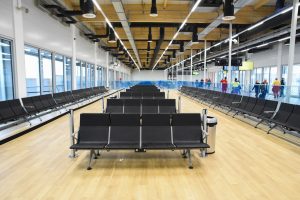 The operator, Budapest Airport Ltd, turned to Neptunus for a swift solution to improve passenger facilities. Budapest Airport has invested in the relocatable facilities to meet the increased demand. Both new demountable terminal buildings for the fast-expanding airport utilize Neptunus’ state-of-the-art modular Flexolution I technology with an external height of 6.5 metres. The 76-meter-long corridor is built with the company’s Flexolution I structure and has a height of 4.25m.

The sustainable buildings can be rapidly dismantled to be reused elsewhere.

Martins Tamovics (Technical Project Director ) and René Droese (Chief Property and Cargo Officer) in charge of the project from the first idea until handover emphasized the close cooperation between the parties, the fast-reaction and professional support by the Neptunus team, and certainly the high-quality building structure developed and erected in a very short time frame.

It took a 20-strong team of Neptunus technicians just four weeks to build the Pier 1 facility which will be in place for several years.

Neptunus has a growing reputation for providing demountable and temporary facilities to airports throughout Europe. In 2018 the company constructed a temporary terminal building at Flughafen Berlin Schönefeld Airport while crucial renovation work was being carried out on the permanent building.