Rapid technological advancements have allowed organizations in all fields of life to automate processes, which until recently still were performed by humans. Although the aviation industry also has made significant advancements in digitalization and automation, the loading of passenger baggage has remained largely unchanged and, on many airports, till today is performed manually. Still a lot of staff – who could be more usefully engaged – is tied up with manual baggage moving and lifting, which is associated with work-related musculoskeletal disorders (WMSDs). That is, although the solution for eliminating those labor-intensive and hazardous tasks soon is going to be more than twenty years old; The Automated Baggage Loading Equipment. 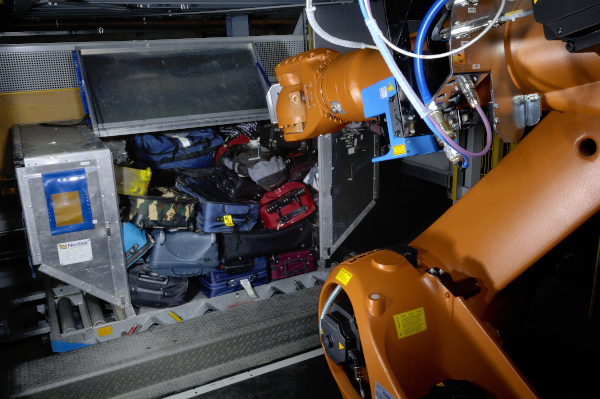 How else is it to explain, that nowadays parts of the process of baggage loading mostly still are performed similar to the times when air travel just had started; by hand and sheer muscle power. This, although teams from different companies already 20 years ago started to tackle automated baggage loading into ULD’s (Unit Load Device, a container to transport baggage). In an effort to free airport staff of lifting (literally) tons of baggage every day by mere human strength, they used back in the days ultra-modern industry robots, visual technology and computing power. Although they all utilized similar fundamental concepts, not everyone succeeded in bringing a solution to market maturity. One of the teams from back then, that in fact was able to develop an operational baggage loading solution, is the AAT Automation GmbH from Karlsruhe/Germany.

Founded in 1995 AAT has been serving customers to implement innovative solutions for automation requirements in a wide variety of areas, such as conveyor and automated warehouse systems, production and recycling facilities, AGV’s and robotics. As a first mover on automated baggage loading, AAT’s Automated Baggage Loading Equipment (ABLE) currently is in operation on several airports in Europe. For example, at Amsterdam Airport Schiphol a total of 6 ABLE cells are loading passenger baggage onto Rampcarts, or into AKE or AKH containers since 2010. Every single cell currently is capable of loading up to 200 pieces of baggage per hour, thus disburdening the airports ground handling staff tremendously. 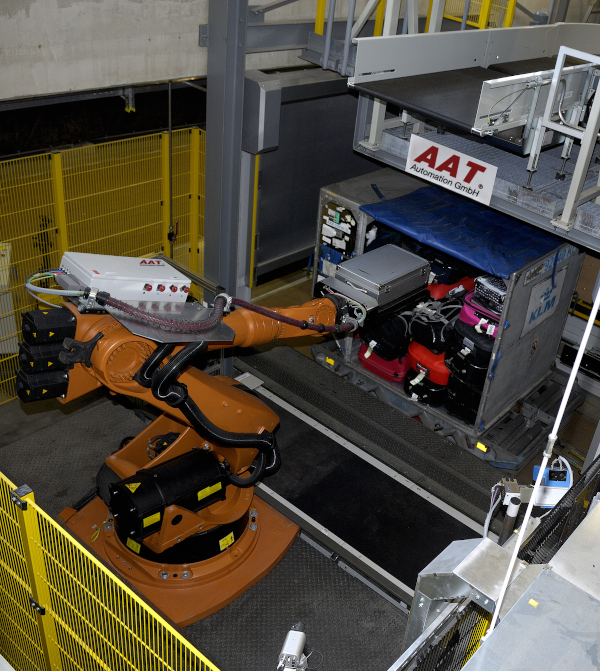 Each ABLE cell consists of a standard 7-axis industrial robot with a load-handling-device, called „Gripper“, and of course the required visual technology and computing devices. The to be loaded baggage from the airports baggage-handling-conveyor-system is transported to the respective loading cell, where it gets automatically measured and weighted shortly before being picked up by the robots Gripper; A short belt conveyor with fold out wings on the side, which if necessary will give the baggage additional stability when rapidly being moved by the robot. The loading cycle time, from the handover conveyor onto the gripper and then into the ULD, is approximately 15 seconds.
This although the currently used visual technology, a shoebox sized scanner module, makes a time consuming scan movement by the robot necessary, to analyze and picture the actual filling and topology of the ULD’s inside. After the picture is taken and converted in bits and digits, an intelligent software algorithm decides where to put the next piece of baggage. Wether hard-case or soft-shell suitcases, backpacks, boxes, wrapped up plastic bags,… the ABLE system can handle everything.

AAT currently is working on replacing the already outdated scanner modules with state-of-the-art camera technology. Those new cameras are not only much smaller and cheaper, they also will make the scan movement obsolete, therefore cut several seconds from the loading cycle time. Together with other improvements which are already in development, such as an optimized layout of the robot cell and ULD feed-in/out by AGV (Automated Guided Vehicle), it is planned to double the performance of the system to 400 pieces of baggage per hour. The self-driving AGV’s are also part of AAT’s core competence, which till now mainly were utilized in the automotive and logistics industry. With comprehensive knowhow in different fields of automation and more than 10 years of real word experience in the airport industry, AAT is capable of designing greenfield turnkey solutions of their ABLE System, as well as integrating it seamlessly into already existing systems.

The team of AAT Automation GmbH, who’s motto is „Intelligence in Automation“, together with their partners can offer a proven and dependable solution for the challenges of baggage loading. Newly availabe, better and cheaper technology means a quicker ROI, therefore two decades after the developments in this field have started, the time is ripe to finally end the days of tedious manual baggage loading on airports all over the world.