Halfway through the 20th century in Chile, the need arose for improving the existing airport network on account of the boom of the aeronautics industry. In Santiago, the then so-called Los Cerrillos International Airport was no longer able to cope and the idea took shape to build a new facility to handle domestic and international flights.

It was thus that President Carlos Ibanez del Campo commissioned the development of a new nationwide airport network to meet the characteristics and requirements of the new airplanes that would revolutionize the world’s aeronautical activities. This plan envisaged that the major airport was to be sited in the capital city of Santiago.

In March 1980 the Chilean government decided to change the name of the airport to “Comodoro Arturo Merino Benitez International Airport”, in the honor of the founder and first Commander in Chief of the Chilean Air Force (FACH), who was also a major precursor of military, civil and commercial aviation in the country as the creator of Línea Aérea Nacional (LAN), which at that time was a State-owned company.

Already in the nineties, the Airport was lagging behind other countries’ terminals due to the high demand for passenger flights and because no major repairs to its infrastructure had been performed in its nearly 25 years of existence. For this reason, it was decided to build a new international terminal, which was to open on February 14, 1994.

This building forms the basis of the current infrastructure, although it has undergone many changes. For example, the current east circular building called Rotonda Oriente joining the domestic terminal (which until then still operated in the old building) to the current complex was implemented in 2001.

With Nuevo Pudahuel coming into the picture, Santiago’s International Airport will now again change its image and operation. The goal, however, is the same: to provide the best service to passengers and all the industry’s stakeholders by offering high-quality amenities and world-class efficient facilities.

Following VINCI Airports and Groupe ADP’s environmental plans, Nuevo Pudahuel has made the first step to assure Santiago Airport, Arturo Merino Benítez, becomes the first in Latin America to incorporate the use of hydrogen in …
Read More 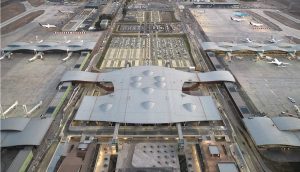