Cologne Bonn Airport is one of the most important commercial airports in Germany, both for passengers and for cargo. In 2019, before the start of the coronavirus pandemic, it was used by around 12.4 million passengers. In 2020, passenger numbers fell by 75 per cent; there were 3.1 million passengers.

Air cargo is its second mainstay, which has been stable, even during the pandemic. In 2020, around 863,000 tonnes of goods were handled, including medical PPE and vaccines. That corresponds to an increase of 6 per cent in comparison to 2019. Cologne Bonn Airport is the logistical heart of North Rhine-Westphalia and is the only German airport to be a hub for all three major express service providers: UPS, FedEx and DHL.

Cologne Bonn Airport is a major economic factor and, at the same time, one of the biggest places of employment in the region. Around 15,000 people are employed by 130 companies and authorities at the site, more than 1,700 directly by the airport company itself. The airport therefore secures income of more than Euro 560 million. According to a study from 2016, an additional 7,400 jobs in the surrounding area are associated with the airport, and as many as 16,500 more throughout Germany.

The airport is located in the south of the city of Cologne, with over a million inhabitants, in the immediate vicinity of the Federal City of Bonn and the Rhine-Sieg and Rheinisch-Bergisch districts. Around 16 million people live and work within a radius of 100 kilometres. It lies at the heart of one of the biggest import and export regions in Europe.

In future, environmental protection and sustainability will become increasingly important for the airport. Its climate protection strategy aims for it to be completely climate-neutral by 2050. To do this, it is advancing the further development of alternative engines for operating an airport (e.g. hydrogen) and, together with partners, is developing new forms of mobility, such as an air taxi network. 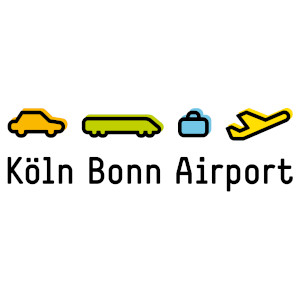 The airline Eurowings and Cologne/Bonn Airport are leading the way on the subject of sustainability and are launching an ambitious project together that will contribute to protecting ecosystems and forests in the Rhineland: the two …
Read More

Reading Material for a Relaxed Flight at Cologne Bonn Airport

This week Cologne Bonn Airport (CGN) celebrated the arrival of MNG Airlines’ brand new converted A330-300 P2F and the inaugural flight of the new regular CGN-JFK route. By adding the A330-300 P2F, which can carry …
Read More

DLR and Cologne Bonn Airport to Work Together More Closely in Future If there is a central location for aviation in North Rhine-Westphalia, then it is in the south of Cologne, at the edge of the …
Read More
Cologne Bonn Airport
Kennedystraße,
51147 Köln
Germany