In the late 1980s, Houston City Council considered a plan to rename the airport after Mickey Leland—an African-American U.S. Congressman who died in an aviation accident in Ethiopia. Instead of renaming the whole airport, the city named Mickey Leland International Arrivals Building, which would later become Mickey Leland Terminal D, after the congressman. In April 1997, Houston City Council unanimously voted to rename the airport George Bush Intercontinental Airport/Houston, after George H. W. Bush, the 41st President of the United States.

As of 2007, Terminals A and B remain from the airport’s original design. Lewis W. Cutrer Terminal C opened in 1981, the Mickey Leland International Arrivals Building (now called Terminal D) opened in May 1990, and the new Terminal E partially opened on June 3, 2003. The rest of Terminal E opened on January 7, 2004. Terminal D is the arrival point for all international flights except for United flights, which use Terminal E. Flights from Canada on Air Canada and WestJet arrive in terminal A. Terminal D also held customs and INS until the opening of the new Federal Inspection Service (FIS) building, completed on January 25, 2005. 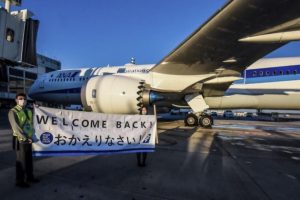