King Khalid International Airport was opened in 1983 A.D in Riyadh city. It is located in an area of 375 km2 about 35 km from the city center, containing five passengers’ terminals, 40 Passenger boarding bridges, and more car parking designed for 11.600 vehicles. The airport consists of Royal Terminal, the Central Control Tower, two Parallel Runways, w​hich are each 4,260 meters ​(13,980 ft) long.​​

There are five main passenger terminals at the airport, four of them were built when the airport started operation in 1983, and terminal 5 was opened in 2016. 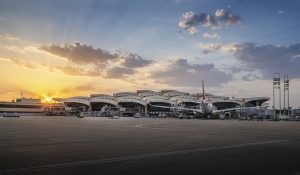