Memphis started its fledgling aviation industry in 1927 when city Mayor Watkins Overton created a municipal Airport Planning Commission. Among the commission’s first tasks was to choose a site for the proposed airport. The commission chose Ward Farm, a 200-acre tract seven miles from Downtown, where the open countryside would allow for future growth.

A modern terminal was built in 1938 to meet the demands for increased commercial passenger service. When the United States entered World War II, the U.S. Army assumed control of the Memphis International Airport facilities, halting further expansion and progress until 1947, when the troops vacated the airfield and existing facilities were enlarged.

A new Airport Planning Commission was named in 1956 and members wanted to design and build a new airport terminal to meet the rising demands of the “Jet Age.” The new $5.5 million terminal was dedicated in 1963 and Memphis Municipal Airport was renamed Memphis Metropolitan Airport. The new terminal featured 22 gate positions, allowing enough space for seven airlines to operate daily flights.

The airport’s name was changed in 1969 to Memphis International Airport to reflect its status as a point of origin and entry point for international passengers and cargo. That same year the Memphis-Shelby County Airport Authority was created to plan and direct the future of Memphis aviation. Under the newly created authority, airport terminal capacity would more than double over the next 10 years, with the addition of two sub-terminals and their adjacent concourses.

Memphis International Airport received another huge boost in 1973, when what is now known as FedEx was founded in Memphis, and the company built a sorting facility and an administration building on the airfield. FedEx’s package-sorting complex, which would later come to be known as the Super Hub, along with the company’s around-the-clock operations have combined over the years to make Memphis International Airport the busiest cargo airport in the world from 1992 to 2009. Memphis is currently the second-busiest cargo airport in the world behind Hong Kong, and remains No. 1 in the U.S.

Memphis Shelby County Airport Authority (MSCAA) will host public information meetings on October 25 and 26 to present details of its current Master Plan Update (MPU). Both sessions will be held in the Central Ballroom of …
Read More

Memphis International Airport will seek to connect contractors to approximately half a billion dollars in contract opportunities on Friday, August 19, 2022, with the MEM CONNECT 2022 forum. The forum will provide information about a variety …
Read More 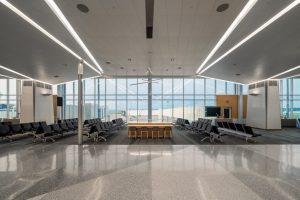