Plattsburgh International Airport is a county public-use airport located three nautical miles south of the central business district of the city of Plattsburgh, within the Town of Plattsburgh in Clinton County, New York, United States.

Our two-floor passenger terminal was designed to handle several types and sizes of aircrafts, with several special features. Plattsburgh has quickly established itself as the secondary airport for nearby Montréal: “Montreal’s U.S. Airport”, and in 2018, Plattsburgh saw more than 150,000 enplanements. 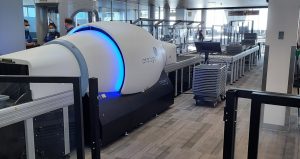