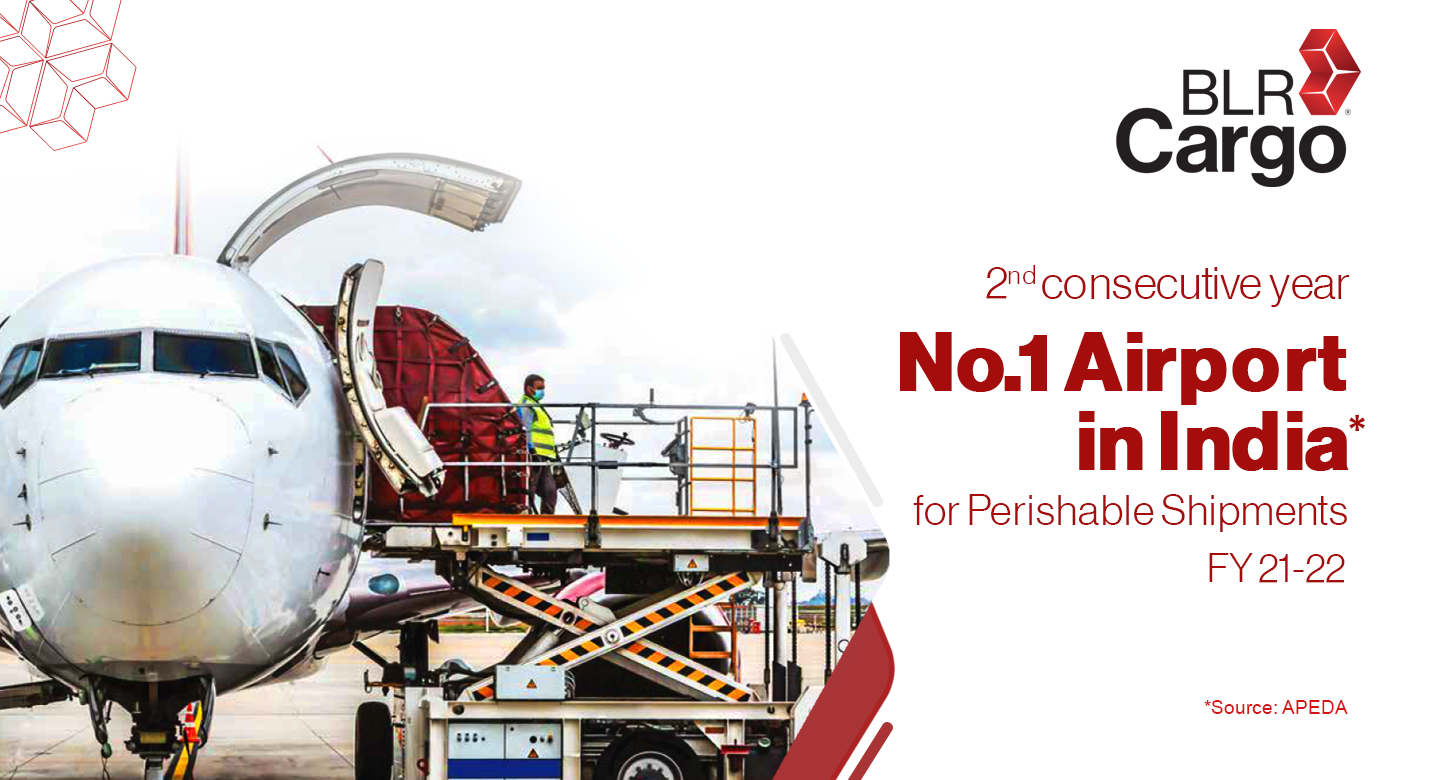 Fruits and vegetables along with the export of poultry and flower have been major segments driving this growth. 36,493 MT of poultry and 1,952 MT of flowers were exported from BLR Airport in FY’22. Doha emerged as the leading destination followed by Singapore, London, and Male. A total of 33 cargo freighter airlines transported perishable shipments from BLR Airport to 85 international destinations in FY’22.

“BLR Airport has the advantage of dedicated cold zones enabling processing of perishable goods for export, which is the highest in India. The infrastructure that we provide ensures cold-chain integrity and seamless movement of perishables, without any change in the optimum storage temperature. Our recent partnerships with multiple cargo partners for infrastructure and technology will only make the Airport’s cargo capacity stronger and even better”, stated Satyaki Raghunath, Chief Strategy and Development Officer at Bangalore International Airport Ltd (BIAL).

The support extended by various statutory bodies from both the Government of India (GoI) and the Government of Karnataka (GoK), including Indian Customs, the Agricultural and Processed Food Products Export Development Authority (APEDA), Plant Quarantine Office Bangalore, and Karnataka State Agricultural Produce Processing and Export Corporation Limited (KAPPEC) has enabled BLR Airport to maintain quality standards across operations at its cargo facility.

APEDA has been instrumental in supporting perishable exporters in Karnataka and understanding their needs to further drive exports.

“BLR Airport has made a significant achievement by becoming the No 1. Airport to process perishable shipments, twice in a row. It is particularly special considering this year is being celebrated as Azadi Ka Amrit Mahotsav. APEDA has always focused on promoting farmer producer organisations and boosting agricultural exports from the country. We have been collaborating with airports, exporters, and other key stakeholders in the cargo business to help upgrade the required infrastructure. BLR Airport is at the forefront with its world-class facilities, and it continues to innovate, hence it is one of the preferred cargo airports in the country for agricultural exporters,” said Dr. M. Angamuthu, Chairman, APEDA.

BLR Airport has state-of-the-art facilities that meet the ever-increasing demand and handling requirements of temperature-sensitive cargo, establishing itself as India’s perishable hub. The cargo terminals have a cold-chain handling capacity of 60,000 MT annually. Since time is critical in perishable logistics, the Airport has invested in several tech-driven interventions to ensure that products reach their destination while still offering the same freshness, quality, and appeal to consumers. BLR Airport’s dedicated cold zone, provides temperature zones ranging from -25°C to + 8°C under the same roof.

An Airport Cargo Community System (ACS) has been implemented at the common-user cargo terminals of BLR Airport. It is a seamless medium for the cargo community to track their shipments through the Airport. This eliminates the need for paperwork across both terminals.

Another distinctive feature of the Cargo Terminal at BLR Airport is the Plant Quarantine Inspection and Certification Facility, which enables seamless and faster transit of perishables. The processes at BLR Airport are geared in a way that all farm-fresh commodities can reach their destination within 24 hours of harvest.

With its conducive geographic location, aided by robust infrastructure, operated by leading cargo handling providers, and adequate airline capacities to key markets globally, BLR Airport has transformed itself into the preferred choice for perishable shipments in India.

The current cargo capacity of BLR Airport is 715,000 MT annually, which is the largest cargo processing capacity in South India. The Airport aims to expand its cargo infrastructure to provide a capacity of approx. 1.5 million MT by the mid-2030s.