Ricochet AS was acquired by Jotron AS in 2012, and forms part of the ATC and Coastal Communication Division. The Ricochet Recorder technology is guarded as world-leading for synchronised real-time stream and event recording and replay within ATC. The product has been designed and continuously developed to meet the specific demands of ATM environments worldwide and is fully compliant with national and international standards.

The Ricochet software modules can be assembled in a multitude of combinations. Ricochet software, coupled with COTS hardware, enables Jotron to deliver a state-of-the-art recording system for use in all ATC/ATM relations.

This unique recording solution captures, replays and analyses all data. It delivers an overview of the total scenario when reconstruction of an incident is imperative.

Currently, approximately 50% of the airspace of the southern hemisphere is recorded by Ricochet. 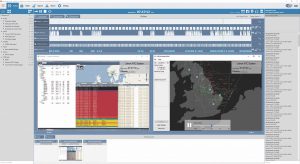 The Jotron Ricochet system has focus exclusively on recording for the ATC market. The Ricochet software modules are flexible and can be assembled in a multitude of combinations. In addition, an unlimited number of channels …
View Product
Make Enquiry