An airport was opened on the site on 16 July 1938. During the Second World War, the airport was used by fighters of the Royal Air Force. Commercial activity and general aviation flight training at Luton resumed during 1952. By the 1960s, Luton Airport was playing a key role in the development of the package holiday business; by 1969, a fifth of all holiday flights from the UK departed from Luton Airport. From the mid-1960s, executive aircraft have been based at the airport. During the late 1970s, an expansion plan was initiated at Luton to accommodate as many as 5 million passengers per year, although the airport experienced a reduction in passenger numbers in the 1980s. In 1990, the airport was renamed London Luton Airport to re-emphasise the airport’s proximity to the capital.

The arrival of new operators at Luton during the 1990s, such as charter operator MyTravel Group and new low-cost scheduled flights from Debonair and EasyJet, contributed to a rapid increase in passenger numbers that made it the fastest growing major airport in the UK. In August 1997, to fund an £80 million extension of the airport, a 30-year concession contract was issued to a public-private partnership consortium, London Luton Airport Operations Limited. Throughout the 1990s, £30 million was invested in Luton’s infrastructure and facilities. In November 1999, a new £40 million terminal was opened by Queen Elizabeth II and Prince Philip; the new building houses 60 check-in desks, baggage and flight information systems and a range of commercial outlets. During 2004/5, the departure and arrivals lounges and other facilities were redeveloped at a cost of £38 million.

The airport serves as a base for EasyJet, TUI Airways, Ryanair and Wizz Air. The vast majority of the routes served are within Europe, although there are some charter and scheduled routes to destinations in Northern Africa and Asia. 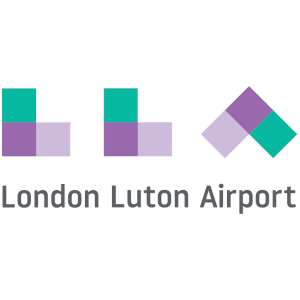 London Luton Airport (LLA) is hosting a networking event for local suppliers looking to get advice on bidding for contracts at the airport. The event will take place at Putteridge Bury Conference Centre on Tuesday 8th …
Read More

London Luton Airport has joined forces with PG tips to install an ‘emergen-tea’ box, ensuring any Brits who have forgotten to pack their favourite tea can pick up a pack in the airport and enjoy the …
Read More
London Luton Airport
Airport Way
Luton
Bedfordshire
United Kingdom
LU2 9LY