Boryspil International Airport is a state commercial enterprise of civil aviation, founded on a state ownership and is subordinated to the Ministry of Infrastructure of Ukraine.

Due to the active policy of air carriers attraction, over 60 national and foreign airlines operate flights to the Airport on more than 120 routes worldwide.

Boryspil Airport is the only airport of Ukraine, successfully competing with the large European hub airports. According to the Airports Council International (ACI EUROPE), in 2018 Boryspil was ranked first among the large European airports (top spot in the European Airports group, handling from 10 to 25 million passengers).

Boryspil is the largest and the busiest airport in Ukraine, providing most of air passenger traffic and much of cargo transportation.

Demand for the Airport services is maintained by the beneficial location at the intersection of numerous international transport routes (connecting Asia with Europe and America), proximity to the capital, availability of the modern infrastructure and introduction of the hub development strategy.

The Airport infrastructure includes two runways (4 km and 3.5 km long), allowing accommodation of all aircraft types, without limitations under weather and visibility conditions, as well as 2 full time operating terminals (D and F). Boryspil is the only airport in Ukraine, from which scheduled transcontinental flights are operated.

Boryspil Airport is constantly striving for improvement. The Airport develops infrastructure, attracts new airlines and enhances the quality of service. In 2019, the Cabinet of Ministers of Ukraine approved the Concept of Boryspil International Airport Development for the period till 2045, the main priorities of which is infrastructure development and introduction of contemporary services. 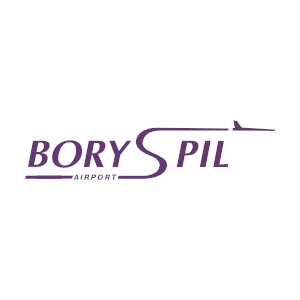 Based on the evaluation results, the International Civil Aviation Organization ICAO officially confirmed the international status of the Boryspil Airport ICAO Training Center for training and retraining of aviation security specialists. The ICAO training center of …
Read More

“The situation in Ukraine changes every hour, but we do have an action plan in case most airlines suspend flights to Ukraine,” said Oleksiy Dubrevskyy, Adviser to the Minister of Infrastructure, Director General of Boryspil …
Read More

Information about Boryspil International Airport operations as of 13th February

Due to contravercial information amid rising tensions around Ukraine, Boryspil International Airport informs about the following: The Airport keeps operating as normal, ensuring security and a high level of air safety in full. Please follow the airlines …
Read More

On February 1, the art-educational exhibition “She is science” was opened in the Terminal D of Boryspil International Airport. The exposition consists of 12 stylized portraits of prominent Ukrainian women-scientists and essay-stories about them. Among …
Read More

A cargo aircraft with a Ukrainian satellite departs from Boryspil Airport

Boryspil International Airport became a communication platform to discuss the future ofUkrainian aviation and tourism industries within the framework of the forum “LargeConstruction: Aviation and Tourism” which took place on November 25, 2021. Forum launched with …
Read More

Boryspil is an all-weather airport capable of operating flights under the low visibility and severe weather conditions. Heads of shifts, Engineers, Drivers of the Aerodrome Service are preparing for the winter season well in advance: in …
Read More

Within the course of the meeting at Boryspil Airport, Boschung company presented the latest aviation industry solutions, such as: runway surface condition monitoring system, which informs on the current state of the runway pavement in …
Read More
Boryspil International Airport
Kyiv Oblast
Ukraine
08307