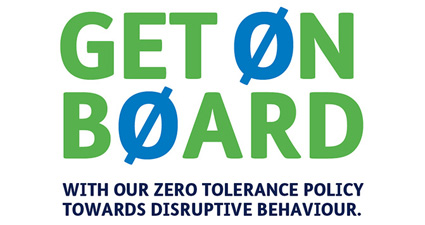 Passengers travelling through Bristol Airport from Thursday 5 September will see a new awareness programme entitled Get On Board. The initiative will help raise awareness of the serious implications of disruptive behaviour at the Airport or on board an aircraft.

Bristol Airport is already committed to the UK Aviation Code of Practice on Disruptive Passengers and is an active member of the ‘One Too Many’ initiative, the aviation industry’s disruptive passenger awareness programme.

The Get On Board awareness campaign will be a timely reminder to passengers of the serious consequences of disruptive activity, and reinforces the UK Aviation Industry Code of Practice on Disruptive Passengers. Penalties can range from being denied boarding, an airline ban with fines of up to £80,000 or jail for the most serious offences.

Passengers will see warnings about disruptive behaviour posted on digital display screens in the terminal, in retail and food and drink outlets, and on social media clearly stating it is an offence to be disruptive on-board an aircraft. The campaign will feature the strapline ‘If you’re not on board, you won’t get on board’.

“We want all passengers flying from Bristol Airport to have an enjoyable start to their journey, but anti-social behaviour by a minority can spoil the experience for everyone. Any anti-social behaviour by a passenger is not accepted by the Airport or airlines and could result in passengers being refused travel. Through coordinated involvement from the airport police, catering managers, airlines and airport’s operational teams may result in the passenger being denied boarding and subsequently missing their flight. Bristol Airport’s new Get On Board campaign provides a helpful reminder to passengers about the consequences of disruptive behaviour during their time at the Airport prior to boarding their flight.”

The Get On Board campaign is only one of a number of measures already in place at Bristol Airport since 2017. These include, not selling single bottles of spirits in Airside shops; double measures of spirits not served in bars; security restricting access to the Departure Lounge if passengers are disruptive or provide cause for concern.