Selected from hundreds of nominations and a judging process by a highly respected international panel, the influencer awards span several categories, with those recognised in the list coming from across the globe.

The categories, which are designed to cover roles spanning the sector, included:

The process consisted of two stages. First, IFSEC Global invited nominations from its audience and beyond. Then, a panel of judges – who also put forward their own (limited) number of nominations – assigned points to each nomination based on the persuasiveness of the nomination, their research into the nominee, and their own knowledge of the nominee’s contributions to the field. Judges were not allowed to vote on those they nominated themselves. The final list was then compiled by Lead Judge, Grant Lecky, based on the judges scores.

‘Influencer’ was defined in the following ways:

James Moore, Editor of IFSEC Global, commented: “Once again, the IFSEC Global Influencers in Security & Fire list is of exceptional quality. So many of the nominations were of high quality, and reading through the biographies and achievements of the final list was a pleasure. It’s inspiring to see the levels of dedication and professionalism in the sector – all on an international scale.

“Ultimately, these awards are designed to celebrate the commitment of professionals in the sector who continue to work hard and push for better standards within their field. It’s been a challenging couple of years for many individuals and businesses, so it is a privilege to announce such positive news. I would like to thank all those who submitted nominations and all the judges who took the time to assess the entries and provide their scores.”

Grant Lecky continued his role as Head Judge this year, with Bonnie Butlin also supporting his efforts coordinating the judging process. Grant is co-founder of the Security Partners Forum (SPF), a network of security professionals that fosters greater communication and collaboration between the public, private and non-profit sectors across the globe. Bonnie is also co-founder and Executive Director of the Security Partners Forum, among many other projects.

Commenting on this year’s awards, Grant said: “I am pleased to see that once again we saw a record number of nominations, and with a record number from Africa, the Middle East and Southeast Asia. All categories saw a considerable jump in nominations, particularly Cyber Security and the Association Figures/Academics/Thought Leaders categories. To me this represents the continued growing interest from professionals around the world who are seeking to be named to this prestigious list.”

In addition to the SPF, Grant currently serves as an Expert Network Member (Risk & Resilience) at the World Economic Forum, as member of the global advisory council of the Institute of Strategic Risk Management (ISRM) and is a winner of numerous accolades including a spot on the Canadian Who’s Who and the Bill Zalud Award through the IFPO and Security Magazine.

And, for the first time ever this year, the inaugural ‘Global Security Influencer of the Year’ Award will be announced at the Security & Fire Excellence Awards, set to take place in London, UK in November. The winner will be chosen between the top influencers in the security categories, excluding ‘One to Watch’.

IFSEC Global is a leading news and content resource for those involved in the security and fire safety sectors. Running alongside its sister events, IFSEC International and FIREX International, readers can expect the latest news, updates and opinions from thought leaders and industry.

Entries for the 2022 IFSEC Global Influencers in Security & Fire will open early next year. 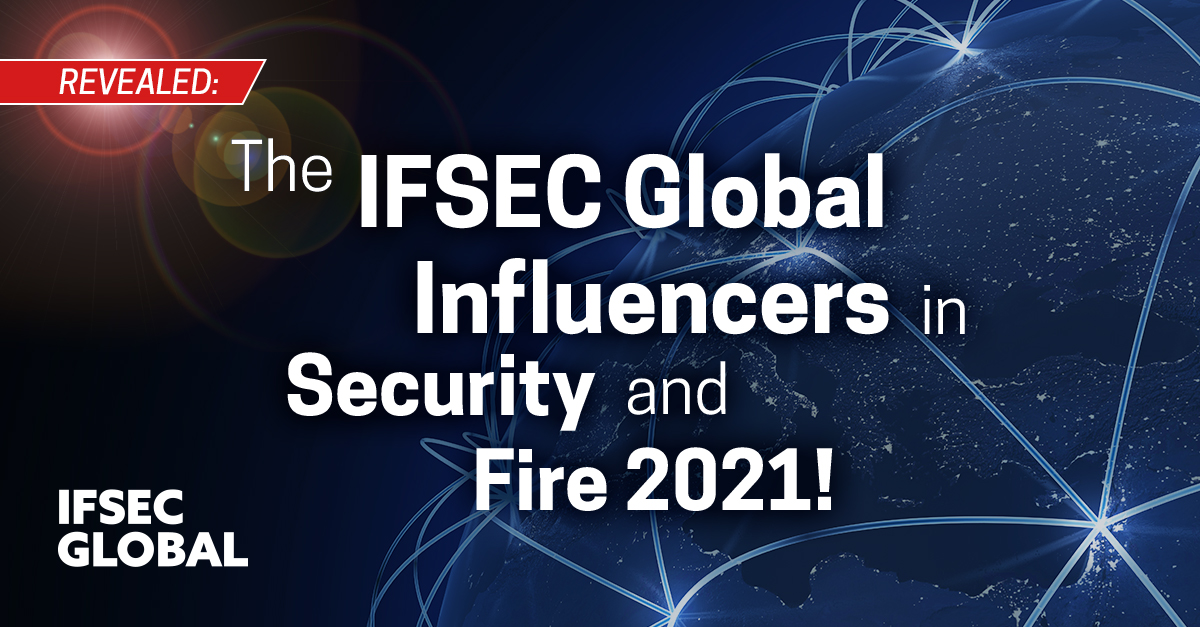