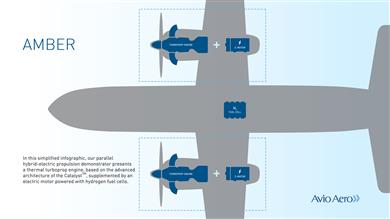 The Clean Aviation Joint Undertaking of the European Commission has awarded approximately €34M million over four years to a consortium led by Avio Aero for the AMBER demonstrator in a recently finalized agreement.

“We are proud to announce the launch of the AMBER hybrid-electric program, which aims to demonstrate the benefits of an innovative aircraft propulsion system coupling a turbine engine with a fuel cell-powered electric motor. As this shows, we’re looking to design, develop, and test breakthrough technologies to shape the future of more sustainable flight in Europe and we appreciate the collaboration with Clean Aviation to make this demonstrator possible,” said Giorgio Abrate, vice president of engineering for Avio Aero. “The recognition and awarding of our AMBER proposal by Clean Aviation confirms its strategic and technological value to support European Union ambitions to reach net-zero CO2 emissions from flight by 2050.”

The Clean Aviation partnership with industry helps accelerate innovation of key technologies like electrification to meet these ambitions.

“For the transformation towards climate neutral we must do more with less energy, and aviation is no exception,” Axel Krein, executive director of Clean Aviation. “Clean Aviation’s primary ambition is to drive a step-change in aircraft performance by radically boosting efficiency in aircraft and fleet performance. For regional aircraft, our goal is an improvement of at least 50% compared to a typical flight today. The AMBER project, as one of our 20 daring new projects now underway, will play a key role in helping us to deliver this ambitious target.”

The Avio Aero-led consortium consists of a total 21 members* from Europe, including Avio Aero’s European technology development network of universities and R&D centers. Other GE Aerospace sites in Europe, including in the Czech Republic, Germany, Poland, Turkey, and the United Kingdom will contribute to research of the engine, propeller, and electric powertrain systems.

H2FLY, a German-based company specializing in the development of hydrogen-electric power systems for aircraft, supplies the MW-class fuel cell system, along with the corresponding architecture, interfaces, and fuel cell controls. H2FLY is also responsible for the build-up of the MW fuel cell system as part of the powertrain validation and testing in collaboration with the project partners.

“The development of a megawatt-class hybrid-electric propulsion system for aviation marks an important step towards the realization of emission-free passenger aviation. We look forward to contributing to this development and sharing our expertise as a global technology leader in the field of hydrogen-electric aviation,” said Prof. Dr. Josef Kallo, co-founder and CEO of H2FLY.
Another key partner on the AMBER demonstrator is Leonardo, which will provide guidance on aircraft integration in the configuration of the hybrid electric propulsion system.

AMBER is one of several Clean Aviation projects associated with Avio Aero to be recently awarded funding. The project HYDEA, coordinated by Avio Aero, will develop a hydrogen combustion engine for flight tests in collaboration with Safran Aircraft Engines, Airbus and more European companies, universities and research centers. Additionally, through another project with Clean Aviation called OFELIA, coordinated by Safran Aircraft Engines, plans are to demonstrate open fan architecture in flight tests later this decade in collaboration Airbus. Avio Aero is a key partner with Safran on OFELIA.
The development of hydrogen combustion and open fan technologies are part of CFM International’s** RISE (Revolutionary Innovation for Sustainable Engines) program, which was unveiled in 2021 to advance new engine architectures, hybrid electric and advanced compact core technologies to achieve at least 20% better fuel efficiency and 20% fewer CO2 emissions by the mid-2030s compared to the most efficient engines in service today.
Avio Aero is also part of the HERA Clean Aviation project, led by Leonardo, with the aim to define a regional aircraft concept suited for hybrid-electric propulsion. Leonardo is also participating in a total of eight Clean Aviation proposals, including AMBER and HERA, and is a founding member of Clean Aviation, along with Avio Aero.
*List of participating consortium members:
**CFM International is a 50-50 joint company between GE and Safran Aircraft Engines.