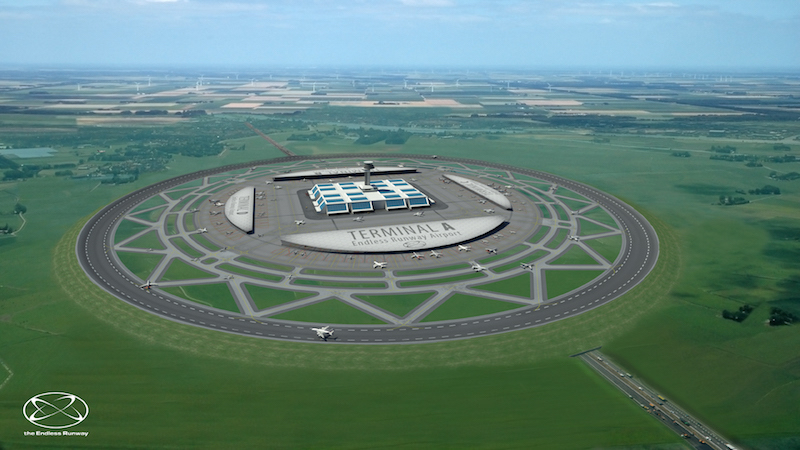 There’s one way to solve the problem of airport space. Make the runways circular.

One man came up with the unusual idea a few years ago and has been working with a team at the Netherland Aerospace Centre to make his dream a reality. Henk Hesselink believes that by creating a 360° runway it will not only conserve space but it will be greener for the environment. And flight simulators are being used to test it.

But how does it work?

There will be one circular runway surrounding the airport. Planes arriving and taking off will be allocated to one of several points located around the circumference of the runway. And up to three planes can use it at the same time.

‘The passengers will experience a slight turn, similar to a turn in the air. Because of the centrifugal forces the aircraft will automatically go slower and go towards the centre of the runway,’ Hesselink told the BBC World Hacks.

Hesselink also believes the new ‘Endless Runway’ will also be kinder to the environment with less ‘fuel burn’ around the airfield.

‘We can also design procedures to make certain the environment is experiencing less noise as we now the possibility to fly in from any direction and toward any direction, we can make the decision on where to fly and where to avoid flying,’ he added.

This means that everyone living around the airport will be subject to a similar amount of noise.

His research has been funded by the European Commission, but a circular runaway has never been built. Experts at the centre believe the track, with a diameter of 3km, is just as safe as a conventional runway. There are currently no plans to build the track, but research continues.