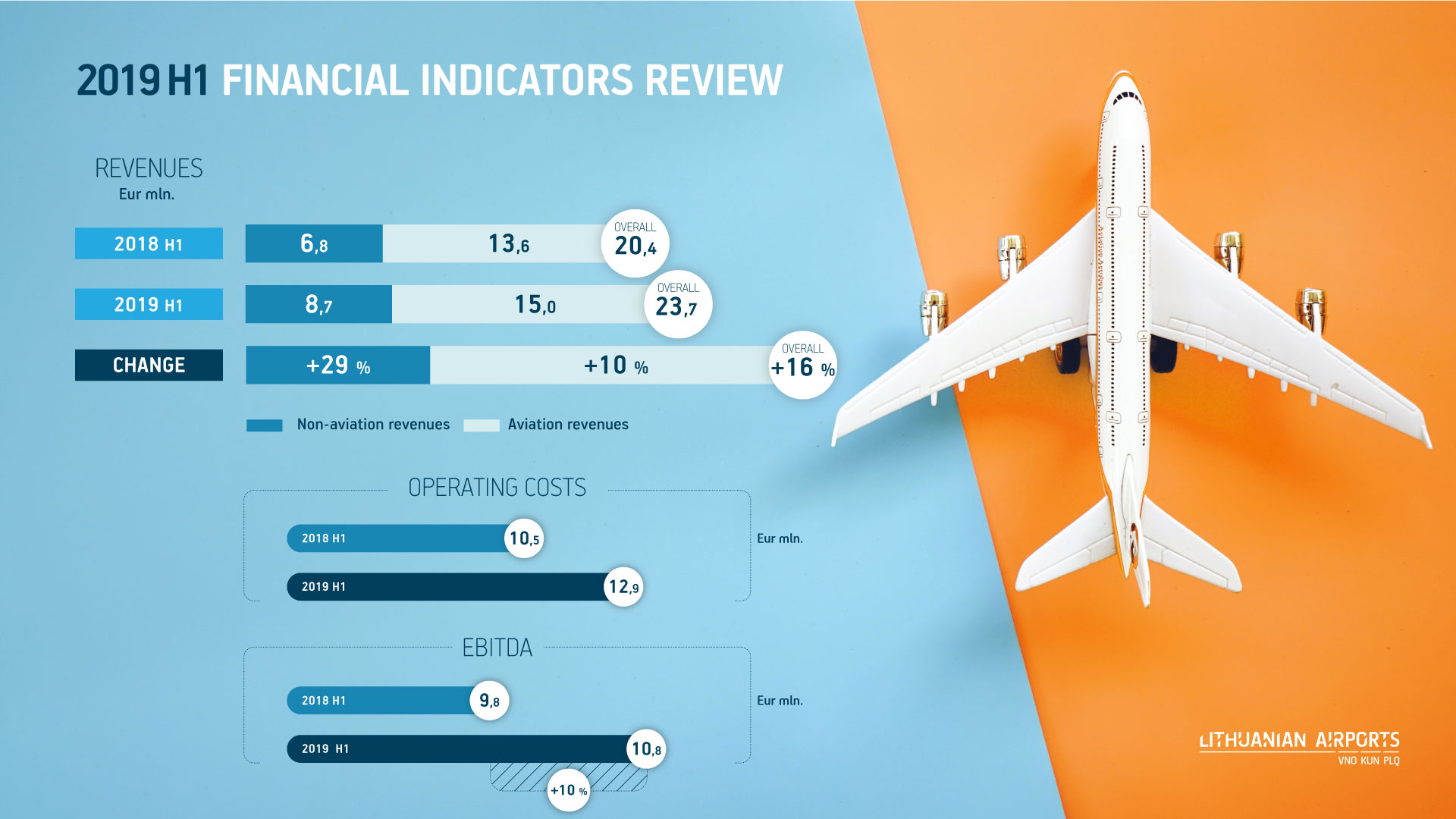 The total revenue of the Lithuanian Airports for the first six months of this year is 16% higher than for the same period in 2018. The revenue generated by aviation activities, i. e. flights, passenger services, freight, etc., increased by 10 percent, while non-aviation revenues from commercial areas, restaurants, cafes, space leasing and other ancillary services at airports increased by as much as 29 percent. Net profit before tax increased by 32 percent in the first half of this year (compared to the same period in 2018) and reached EUR 7.4 million.

“The increase in revenue was determined by the efficient work of the airport team, the successful installation of new commercial spaces in Vilnius Airport and the growing number of passengers. We are particularly pleased with the increase in non-aviation revenue, which is as high as 37 percent of the total income of the first half-year. The development of airport services is beneficial and demonstrates successful implementation of our strategic activities”, – says Tomas Krakauskas, Chairman of the Board of Lithuanian Airports.

“Our vision is open, modern airports with a variety of passenger services, where passengers can access a wide range of non-aviation services. The fact that non-aviation revenue accounts for more than one third of total revenue in the first half-year is the result of decisions planned implemented last year and early this year”, – says Marius Gelžinis, Director General of Lithuanian Airports.

Commercial areas in Kaunas and Palanga have been expanding recently, two new concept pizzerias have been opened at Vilnius Airport last year – at EU and non-Schengen areas, a business club has been renovated and other renovations of the airport’s commercial area have been completed. Construction of the VIP terminal with a conference centre is underway, and development works at Palanga Airport will begin soon. During the 5 years of operation of the company, the size of commercial space at airports increased by 26 percent from 3,569 to 4,852 sq. m. In addition, investments into advertising capabilities were made early this year: more than 100 digital, functional advertising tools were installed at all airports.

In the first half of the year, EBITDA (i. e. earnings before interest, taxes, depreciation and amortization) of Lithuanian Airports increased by one tenth compared to the same period last year and reached EUR 10.8 million. In fact, this year passenger flows at airports are noticeably more subdued than in previous periods, and that hints at consistent, yet moderately accelerating growth.

“With the rapid growth in the number of passengers at airports over the last few years, Lithuania has almost reached the average per capita number of flights of Western European countries, so naturally the number of passengers, as well as aviation revenue, is not growing as rapidly this year. Our main priorities at the moment are to increase non-aviation revenue and successfully complete the reconstruction of Kaunas and Vilnius airports”, – a view by T. Krakauskas, Chairman of the Board of Lithuanian Airports.