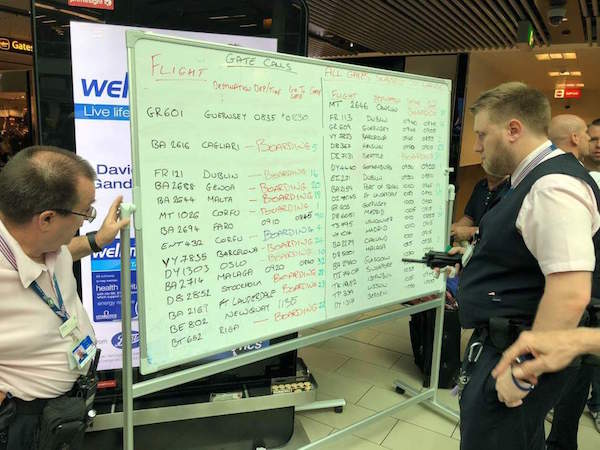 Passengers are facing chaos at Gatwick today as staff were forced to write out flight information on whiteboards after a technical glitch.

Frustrated passengers were pictured gathering around boards filled with handwritten messages to find out their flight information. Flustered airport workers also yelled out gate numbers to try and make sure passengers made their flights on time, witnesses said. 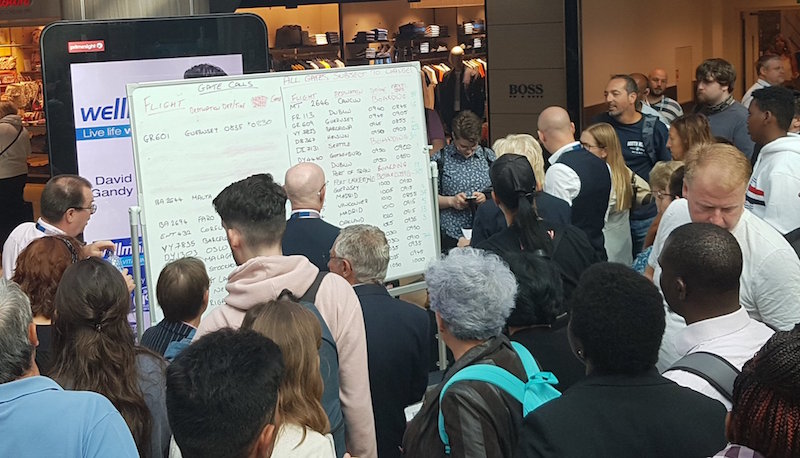 The screens were out of use from about 7am on Monday morning and were still not up and running three hours later. Gatwick Airport said it was trying to resolve the issue as quickly as possible with staff at the terminal updating passengers.

Holidaymaker Gina Murrin, who was left battling against swarms of information to get a look at the makeshift departure boards, said: “The boards aren’t working so they’re using a whiteboard to show the flight times but the crowd around it is ridiculous.

“You can see the information if you wait long enough for people to move but no-one at the front is moving so people are resorting to taking photos or asking others to tell them.”

She said although there were airport staff on hand to update flight information, it was “pretty difficult” to get near to them due to the huge amount of people.

Some passengers have been left confused, wandering around the airport terminal to try and find their gate amid Monday morning’s technical chaos. While some reported that staff were shouting out the destinations to a large crowd gathered around the whiteboard.

A Gatwick spokesperson said: “Due to an ongoing issue with Vodafone – a provider of IT services for Gatwick – flight information is not being displayed correctly on the airport’s digital screens and is currently displayed manually in the terminals.

“Gatwick would like to apologise to any passengers affected and expects Vodafone to resolve the issue as quickly as possible.”