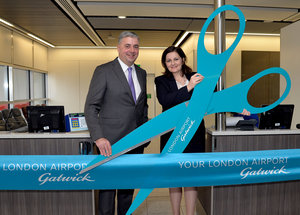 The new pier now offers vertically separated arrival and departure routes for passengers, smoothing their journeys and creating a more flexible and efficient operation for airlines.

Speaking at the opening, Stewart Wingate, CEO of the airport, said, “This pier is a significant upgrade on the previous pier, which had operated since the 1980s when the airport was designed. Now, rather than having cross flows where we had arriving and departing passengers managed by a sequence of doors – which meant from time to time there would be conflict and arriving passengers had to wait before all of the departing passengers had embarked an aircraft before they could proceed along the pier – we have now created two floors. This means we no longer have the conflicts of the passengers blocking one another – everyone has free flow whether you’re embarking or disembarking.”

Another key objective of the new pier was the redesign and modernization of the aircraft stands, which will allow the airport to handle new and changing types of aircraft.

Raymond Melee, development director at Gatwick, explained, “To accommodate a wide range of aircraft we changed the parking position layout to allow for mixed use aircraft. We have low cost carriers, legacy long-hall carriers and charter aircraft so we need to be able to accommodate them all and we now have the flexibility to have either two larger aircraft or three smaller aircraft at any gate.”

Creating a sense of place was also an important factor in the Pier 5 design with the introduction of Gatwick’s new ‘London Square’ interior décor being rolled out to all gate rooms.

“We are trying to give passengers a sense of place so on the glazing in the hold room we have iconic imagery of London,” said Melee. “We also have an interactive area with a projector that beams images on the floor and is useful for passengers traveling with young children – as the children step on the images [such as a fish or leaves] they move to keep the kids occupied in what can be a stressful situation. This has also been rolled out to all of our gates.”

“As we’re seeing such strong passenger growth we’re now increasing our capex program and we will be investing between £200m and £230m (US$287m-US$330m) for each of the next six years,” commented Wingate.

The next part of the transformation project to open will be the £180m (US$258m) Pier 1 in the South Terminal, which will begin operations before the peak traffic of summer 2016. The pier will also include a new baggage handling facility that will process all baggage in the South Terminal.

“We are also consolidating all of our major airlines into just one terminal,” Wingate added. “In the North Terminal we’ve been converting some retail areas into fast bag-drop areas for EasyJet and we’re currently finalizing the first two of the new security lanes for the new security area, which will open in a few months’ time.