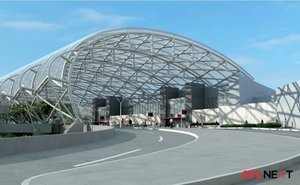 Details of the capital plan were revealed during an inaugural State of the Airport event taking place in the Georgia World Congress Center on March 10, 2016, where renderings of the renovated Domestic Terminal were revealed to the public for the first time. The new plans are the latest addition to the airport’s 2030 ATL Master Plan.

Mayor Reed also discussed the construction of a new concourse, outlined plans for a sixth runway, and described the expansion of the airport’s cargo area. The total investment in Atlanta airport is expected to top US$6bn, with nearly US$1bn set to be spent in 2017 alone.

The improvement works will help Hartsfield-Jackson Atlanta International Airport to maintain its status as one of the busiest airports in the world, generating a direct economic impact of US$35bn for metropolitan Atlanta and US$70bn for the state of Georgia.

Craig Lesser, chairman of the World Trade Center in Atlanta, said, “Hartsfield-Jackson International Airport is a global icon in international travel. The airport is one of the driving reasons that companies from around the world choose Atlanta as a launching pad for their business and trade activities.”

To watch the latest video of the project renderings click here.