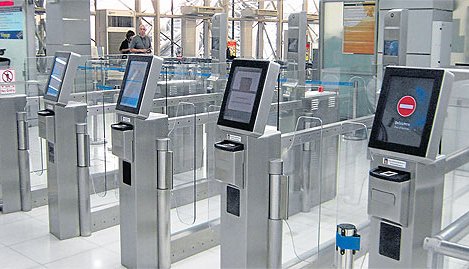 Independent research firm Technavio has released a new report on the global airport e-gates market revealing the latest trends expected to impact the sector between 2016 and 2020.

Technavio defines an emerging trend as a factor that has the potential to significantly impact the market and contribute to its growth or decline. The top four emerging trends according to the report are the emergence of multimodal biometrics, increased investments by homeland security sector, accuracy of on-time airline arrivals and departures, and the adoption of contactless biometrics in e-gates.

Amrita Choudhury, a lead analyst from Technavio, said, “The global airport e-gates market deployment is expected to grow at a compound annual growth rate (CAGR) of close to 20% during the forecast period. There is an increase in growth rate in revenue of the global airport e-gates market because of the high adoption of e-gates at various airports worldwide.

“The major reason for the high adoption of airport e-gates is the growing number of violent activities, such as the 9/11 attacks and the disappearance of a Malaysia Airlines plane in 2014. The installation of e-gates at airports will increase the responsibility of the security personnel to analyze the behavior of suspected passengers and concentrate on passenger profiling, which can help prevent attacks. E-gates also prevent passengers from the hassle of congestion at immigration counters.”

These biometric systems are accurate, reliable, and secure, which is why they are widely adopted for applications such as border control. Some multimodal biometrics are available with both fingerprint and finger vein recognition technology in a single device, which saves the cost of buying two biometric devices.

Fingerprint and facial recognition are the main biometric technologies used in the Asia-Pacifc region. While fingerprint recognition is preferred in the USA, the Middle East prefers iris recognition. The airports planning the installation of e-gates should consider the geographic diversity of citizens and the e-gates may need to be multimodal to provide the necessary flexibility and support a range of biometric options.

Governments worldwide are putting in place strict security measures considering the increasing occurrences of criminal activities involving airports and aircraft. The occurrence of 9/11 damaged public infrastructure and killed thousands of people. Such attacks can be avoided by installing more effective security and screening systems. Airport e-gates can contribute by enhancing such security measures. Thus, to avoid such instances, the airport authorities are investing highly in the deployment of e-gates at airports.

The on-time arrival and departure of aircraft is dependent on the time taken by passengers to undergo security checks before boarding. With the help of airport e-gates the security check process can be eased, which will help in reducing the boarding time for passengers. The rising passenger traffic creates airport congestion, which in turn leads to flight delays, which result in huge losses for airlines as well as passengers.

Physical contact is necessary for fingerprint biometrics, which requires an individual to place a finger on the sensor. However, increasing concerns related to hygiene leave people reluctant to adopt contact biometric solutions in public places such as airports.