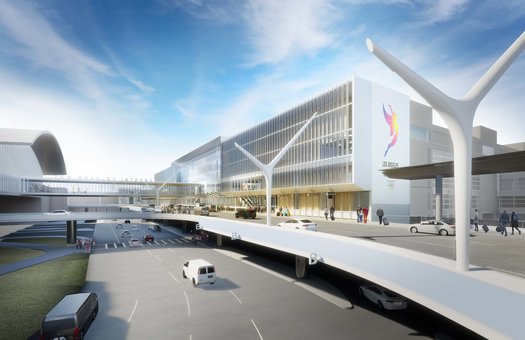 The Los Angeles Board of Airport Commissioners (BOAC) has authorized a US$336.5m contract to design and build three terminal cores as part of the Landside Access Modernization Program (LAMP) at Los Angeles International Airport (LAX) in California.

The terminal cores will be built in key locations at terminals 5, 6, 7 and the Tom Bradley International Terminal, to provide staircases, escalators, elevators and walkways that will connect the existing buildings with the new automated people mover (APM). These will compliment four additional cores, which are planned for construction by American Airlines, Delta Air Lines, and Southwest Airlines, serving terminals 1-5.

The new structures will also provide space that can be used for offices, baggage claims, restrooms and airport lounges. The five-year design-build (DB) contract was awarded to engineering firm Austin Commercial from Dallas, Texas.

“I’m pleased to begin 2018 with a significant advancement of the LAMP program, one that will create a world-class experience when traveling to and from the airport,” said Deborah Flint, CEO of Los Angeles World Airports (LAWA), the airport operator.

“This project will ultimately connect our guests to our regional transportation system, and will create many construction jobs, ensuring that the local workforce is part of building the future of LAX.”

Cynthia Guidry, deputy executive director of LAWA’s planning and development group, said, “With this award, we are moving forward in opening a new front door to LAX. By connecting the airport via an elevated train to metro, parking and other transportation options, we will usher in a new era of convenience and accessibility for all who visit LAX.”

Phase 1 of the Terminal Cores project, which includes preliminary design and associated tasks, is planned to commence in the first quarter of 2018. Phase 2, which includes the conclusion of design work and the start of construction, is anticipated to begin in the first quarter of 2019. The project is anticipated to conclude in 2021.

The LAMP project consists of an APM system with six stations that will run between the central terminal area (CTA) and several other project components. This includes a consolidated rent-a-car facility (ConRAC) and two new Intermodal Transportation Facilities (ITF), inclusive of public parking and passenger drop-off and pick-up areas.

To provide access to the metro regional rail system, the APM system will include a station at the ITF that interfaces with the Airport Metro Connector station at 96th Street/Aviation Boulevard.