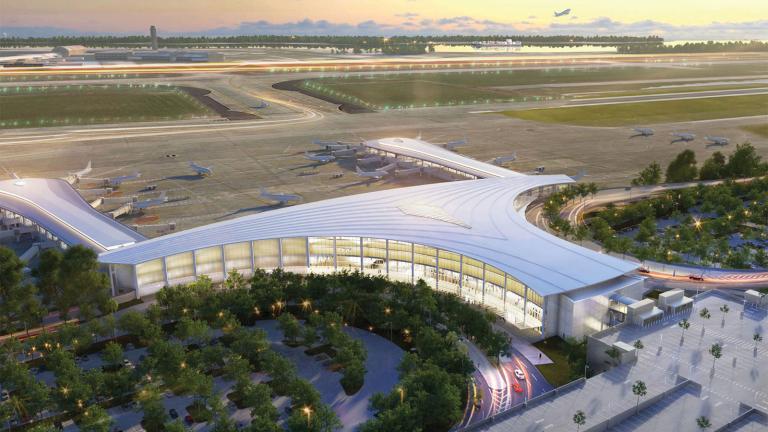 The 35-gate, US$1bn terminal will accommodate growth for the airport, which is now the fifth fastest growing hub in the USA.

“We are extremely proud to have supported the City of New Orleans in bringing the new North Terminal to reality,” said Justin Jones, intermodal business unit director, Atkins. “This beautiful, state-of-the-art facility will not only provide a modern, spacious place to arrive and depart but also bring a taste of what makes New Orleans unique, including its music, food, and culture.”

“The new MSY establishes an iconic new gateway to the city of New Orleans and a passenger experience unlike anything else in the world. We’re truly thrilled to see it contribute to New Orleans’ growth as a domestic and international destination,” added Steven Lichtenberger, AIA, president, Leo A Daly.

Design for the terminal was developed and completed by the Crescent City Aviation Team (CCAT), a joint venture of Atkins and Leo A Daly. CCAT led the design of the airport terminal, its three concourses, concession program and two parking garages. The terminal design was based on an initial concept by Pelli Clarke Pelli Architects.

The new facility creates a sense of place – its architectural form evokes the soft curves of the Mississippi River. Meanwhile, retail and F&B offerings from Stellar Partners and HMSHost reflect local culture and brands.

The terminal features a single security checkpoint, which serves both foreign and domestic flights. The terminal’s layered, open feeling, with prominent views of the airfield, makes the airport easy for travelers to navigate.

The 35-gate terminal also includes the six-gate Concourse A, which was added nine months into construction to accommodate increasing demand for domestic and international travel to the city.