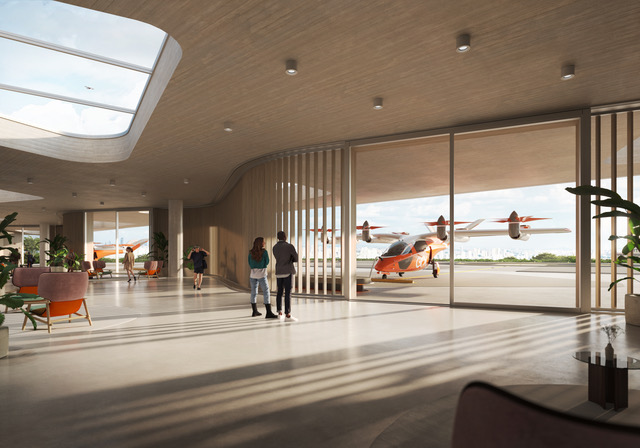 A partnership of global leaders in aviation and airports announces its intention to explore the infrastructure requirements to bring eVTOL passenger flight to Brazil within this decade. The partnership includes:

The partnership will explore and define vertiport design and locations, as well as further infrastructure requirements for eVTOL operations in Brazil. With its well-developed Urban Air Mobility (UAM) market based on helicopter services, advanced aviation ecosystem and unique demographics, Brazil is set to become one of the pioneering markets for eVTOL services, including for Vertical’s VX4.

Each partner brings sector-specific and complementary expertise to bring eVTOL operations into operation in Brazil this decade. In particular, the partnership will benefit from Corporación América Airports’ special team dedicated to the research and development of the Advanced Air Mobility (AAM) segment and its two-decade long expertise in airports design, construction and operation, as well as passenger traffic management. Corporación América Airports has already developed its own conceptual vertiport design and progressed AAM traffic analysis across several countries.

With some of the most congested cities in the world, the introduction of eVTOLs, such as the VX4, will transform how people move around and above the urban landscape, in Brazil. The VX4 will permit short-haul zero emissions journeys that will revolutionise city air travel for Brazilians’ everyday lives by changing how we connect, commute and travel more efficiently, all in a more sustainable way.

This partnership builds on GOL’s and Grupo Comporte’s commitment to purchase or lease up to 250 of Vertical’s VX4 eVTOL aircraft from Avolon, announced last year. That commitment saw Avolon launch and lead a Working Group aiming at commercialising eVTOL aircraft in Brazil with Vertical Aerospace, Grupo Comporte and GOL. The Working Group has already conducted project familiarisation workshops with the Brazilian civil aviation authority Agência Nacional de Aviação Civil (ANAC) to permit the swift validation of the piloted, zero operating emissions and four-passenger VX4 aircraft. The VX4 is projected to have speeds of up to 200 mph, a range over 100 miles, be near silent when in flight and offer low cost per passenger mile.

Dómhnal Slattery, CEO of Avolon commented: “The scale of our ambition for eVTOLs is reflected in our partnerships with some of the leading transportation and airport operators in Latin America. We are partnered with companies that share our ambition to materially reshape the commercial aviation market. Our objective is to deliver the infrastructure requirements to bring zero emissions travel to Brazil mid this decade and revolutionise air travel in the region.”

Martin Eurnekian, CEO of Corporación América Airports, commented: “A new mobility ecosystem is arising and Corporación América Airports as a world leader in airport operations wants to be an agent of change in supporting the AAM implementation in those regions where we operate. With our expertise as airport operators in six countries in three continents along more than 20 years, we are committed to contribute with the development of the AAM ecosystem, in order to better connect people, goods and cultures and promoting a leaner, faster and more sustainable air transport.”

Paulo Kakinoff, CEO of GOL commented: “GOL completely bets on the expertise of CAAP in Advanced Aerial Mobility. Within reach, we have at hand a unique opportunity to unite the efforts of all parties involved to create a sustainable and safe operating ecosystem for eVTOL, with zero carbon emissions, both in Brazil and beyond. Constantly expanding in the regional segment, GOL is committed to including new and providential connectivity alternatives with this new air modal, based on its already extensive air network.”

Stephen Fitzpatrick, Founder and CEO of Vertical commented: “I’m delighted that Vertical is partnering with Avolon, GOL, Grupo Comporte and CAAP to deliver critical eVTOL infrastructure in Brazil. It was in Brazil that I had the inspiration to begin Vertical Aerospace so it is incredible to see it becoming a reality there”.