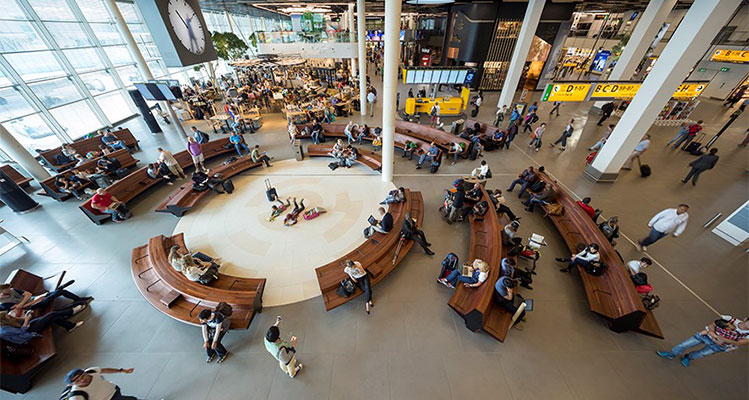 Amsterdam Airport Schiphol is marking its centenary with major investment in enhancing quality and the passenger experience. It recently opened the completely renovated Departure Lounge 2, which followed earlier approval for the development of a new pier and terminal, which will open in 2023.

As part of the Master Plan, both projects will increase capacity, efficiency and comfort for passengers. “To mark Schiphol’s 100th anniversary, we are presenting our passengers with a marvellous gift: a departure lounge unlike any other in the world, where passengers can explore not just one, but seven different worlds,” enthuses André van den Berg Executive Vice President & Chief Commercial Officer, Amsterdam Airport Schiphol.

Departure Lounge 2 has been divided into seven thematic worlds in which the passenger takes centre stage. Each world offers a distinctive experience, from ‘Luxury’ to ‘Family’ and from ‘Modern Dutch’ to ‘Care & Wellness’. Furthermore, upon entering the space, departing passengers can survey the seven worlds in a single glance. Each theme world has been constructed using custom materials and has its own design, as well as tailored amenities such as seating areas, shops, restaurants and cafés. The worlds’ interiors have been designed using sustainable materials such as FSC-certified wood and LED lighting created by Philips in association with ENGIE Services.

Meanwhile, the new terminal, which will serve as a foundation for long-term capacity growth at the airport will be constructed to the south of Schiphol Plaza, next to the air traffic control tower and will be connected to the existing terminal. It is anticipated to serve some 14 million passengers per year and is scheduled for completion in 2023.

The new flexible pier will be located near Cargo Station 1 and is expected to be ready for use in late-2019. A new feature is the flexibility of the aircraft stands on the south side of the pier, which can be used by both narrow- and wide-body aircraft.

“We are making investments in order to reinforce, improve and expand our infrastructure, our quality and our accessibility,” comments Jos Nijhuis, CEO Schiphol Group. “This commitment has made the realisation of the new pier and terminal possible. It represents a hefty investment that will simultaneously provide the foundation for our continued capacity growth, including long-term aspects, such as space to further expand the piers in the future.”

A great deal of preparatory work towards the development of the new pier and terminal is already underway. For example, modifications are being made to the drop-off road; the parking facilities are being expanded; and the demolition of the Schiphol Cargo Centre – a building that has gone unused for a number of years – has begun. Furthermore, efforts are being made to minimise inconvenience for passengers.

“We additionally intend to invest in the station area, the bus station, Schiphol Plaza and Jan Dellaertplein in the coming years. The sum of these parts will serve to strengthen our international competitive position,” concludes Nijhuis. 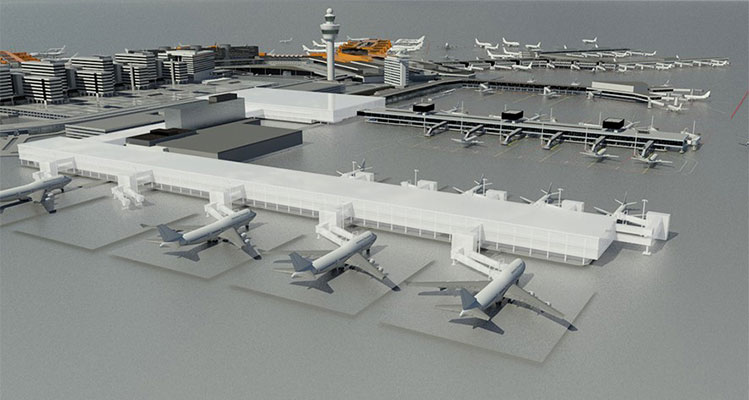 The new terminal, scheduled for completion in 2023, will be constructed to the south of Schiphol Plaza, next to the air traffic control tower and will be connected to the existing terminal, while the new flexible pier will be located near Cargo Station 1 and is expected to be ready for use in late-2019.