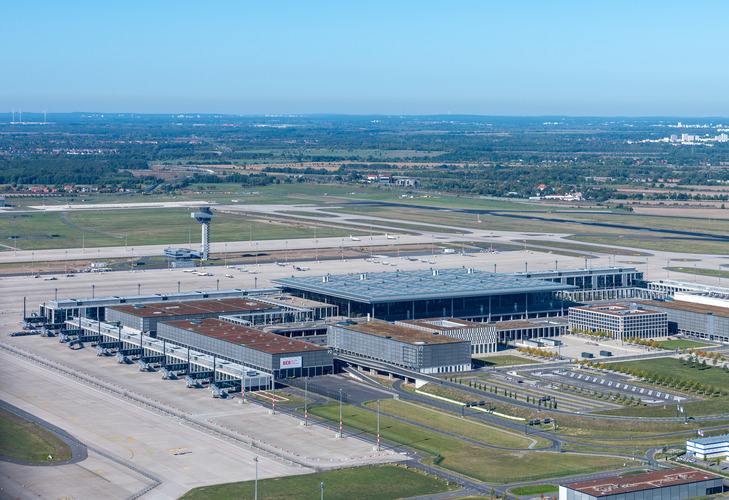 The IATA Code for the new Berlin Brandenburg Airport is BER.

• As part of the expansion work for Berlin Brandenburg Airport, Schönefeld Airport is due to be extended by an area of 970 hectares. The new airport will cover a total area of 1,470 hectares, a figure corresponding to approximately 2,000 football pitches.
• Midfield Airport: The new Terminal 1 building is located between two take-off and landing runways laid parallel to each other, which can be operated independently from each other due to the lateral gap of 1,900 metres between them. The associated gate and aircraft positions are also located compactly between the runways. As a result, the majority of ground noise is retained within the perimeter fence.
• With its structured façades and clear geometric shapes, the terminal embraces architectural elements ranging from Schinkel to Bauhaus.
• North runway: The existing take-off and landing runway currently in place at Schönefeld Airport will become BER’s north runway, and has been extended from 3,000 metres to 3,600 metres.
• South runway: Berlin Brandenburg Airport has a new take-off and landing runway measuring 4,000 metres in length and 60 metres wide.
• Taxiways: A flexible taxiway system will help to ensure the new airport is extremely efficient.
• In its initial version, Terminal 1 will have 16 passenger boarding bridges at the Main Pier. An additional nine bridges can be found at the South Pier. Aircraft can be reached via walk boarding at the North Pier.
• Berlin Brandenburg Airport will have 85 aircraft parking positions to begin with. An additional 15 standing slots are currently scheduled to be commissioned in 2020. In addition, there are a further 30 positions available at BER North (SXF).
• The night flight regulations for Berlin Brandenburg Airport were officially confirmed by the Federal Administrative Court back in October 2011.