The number of passengers and flights increased in all three Lithuanian Airports during the last year, the highest increase was witnessed in Kaunas and Palanga Airports, and the whole network of the Airports offered as much as 92 unique destinations. The national Airports perceive year 2020 as a period of the further growth and expect a total increase of the number of passengers equal to 6 percent.

Even though the growth of aviation market last year lost some speed in most of the European countries, Lithuanian Airports retained stable growth rates. The rates were influenced by successfully implemented destination development strategy, involving also other groups of interested parties – municipalities, business organisations and associations, organisations representing the state abroad. Another component of success was the uninterrupted and successful negotiations with the airlines.

Results of the airports
When reviewing the last year results, Aurimas Stikliūnas, the Head of Aviation Services Division of Lithuanian Airports, claimed that in 2019 Kaunas Airport was the most surprising in Lithuania, since the growth of the passengers there reached as high as 15 percent in comparison to 2018.
“Such growth rate is the highest not only in Lithuania, but in the whole region as well. The growth rate of the number of passengers in Kaunas exceeded that of Riga, Tallinn and Warsaw Airports. The biggest contribution was brought in by the new flights to Cologne and Nuremberg in Germany, also the chartered flights which were commenced for the first time in the history of the airport. We are expecting Kaunas Airport to maintain high passenger number growth rates this year as well”, commented A. Stikliūnas.

Last year Kaunas Airport serviced even 1.1 million of passengers.
Last year for the first time in history Vilnius Airport exceeded the threshold of 5 million serviced passengers within one calendar year (the number is higher by 2 percent in comparison to 2018). The expansion of the scope of activity was essentially determined by four new directions to London City, Eilat, Kharkov and Southend. Moreover, a new airline company “Laudamotion” commenced its flights.

Last year Palanga Airport also witnessed growth. The indicator with the best improvement was the number of flights, which increased by 12 percent even.

“The number of flights in Palanga grew faster than that of passengers. Such change was determined by two new and strategically important directions to Dortmund and Bergen, also the increased frequency of flights to Riga. It is credible that as these directions become more popular at the airport and within the Western Lithuanian market, the number of passengers in every aircraft shall also increase more significantly. We expect that in 2020 the rates of growth at Palanga Airport will be the highest in the whole network of Lithuanian Airports”, told A. Stikliūnas.

In 2020 Lithuanian Airports expect to increase the total number of passengers up to 6.9 million or a growth of 6 percent in comparison to 2019.

Global tendencies
“Lithuanian Airports successfully retain the global aviation growth rates. Usually the aviation flows in the world double every 10-15 years, while the rate of annual number of passengers is twice higher than the actual GDP growth. The rates of growth of our airports coincide with such tendencies and in certain fields we even surpass the global average”, as it was commented by the aviation expert.

When reviewing the global tendencies, according to A. Stikliūnas, it is obvious that the growth of aviation industry is in direct correlation with the overall economic situation: as the global GDP increases, the need and opportunity of passengers to select air transportation increases respectfully.

Furthermore, other circumstances also influence the current situation in the aviation market, for example, the growing price of oil products, the crisis of “Boeing” manufacturer, bankruptcies of airlines and etc.

It is forecasted that in 2020 the global GDP should grow by 2.7 percent on average, while the biggest growth of the number of passengers is expected namely in the markets, where the average growth of GDP will be exceeded. The fastest growing economies will be in Asian, African and South American countries. A significantly more moderate growth is expected in the European region. 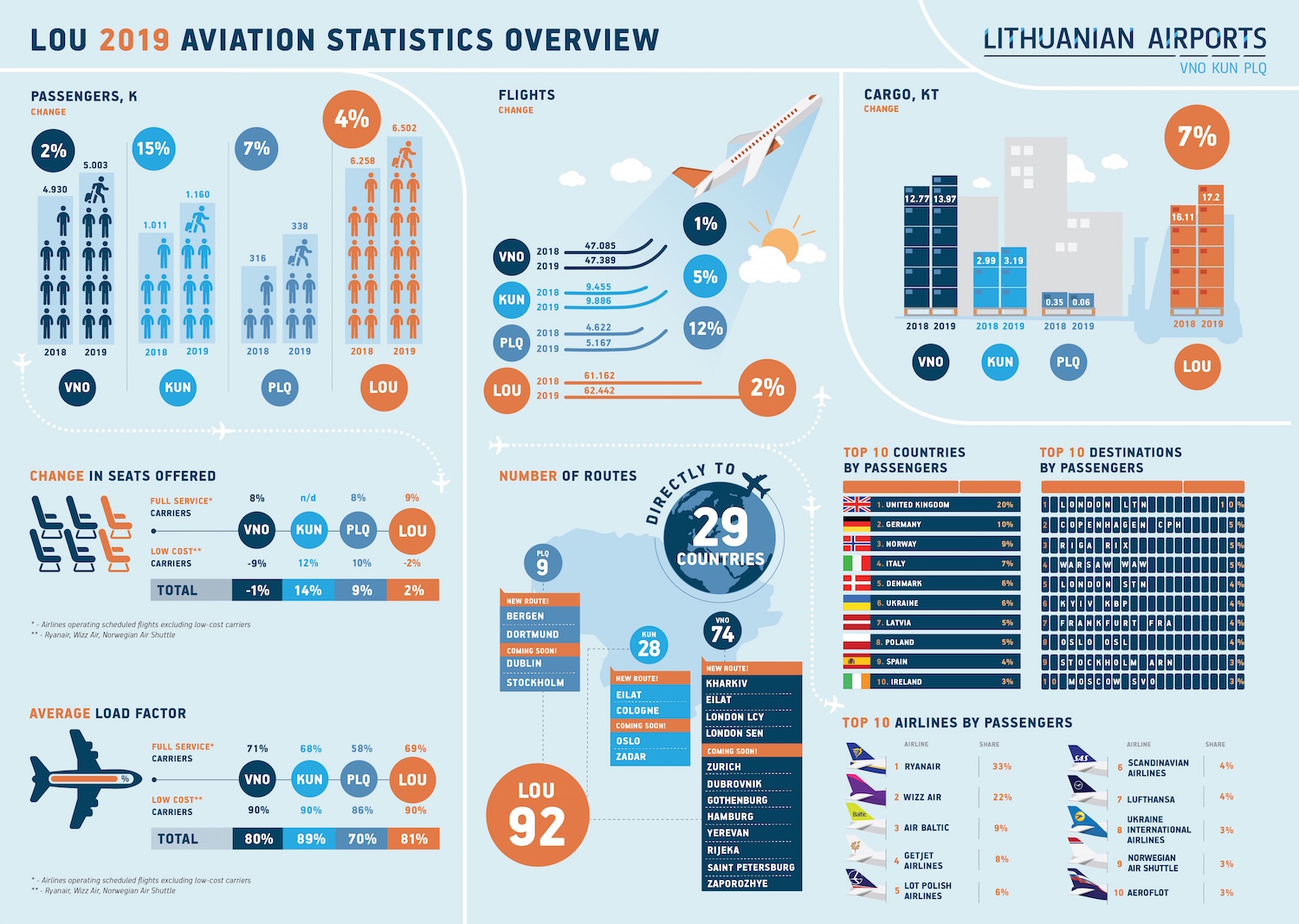