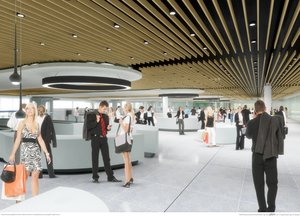 Bristol Airport in southwest England opened the first phase of its £24m (US$32m) western terminal extension project on July 18th ahead of what is expected to be its busiest ever summer season.

The 97,000ft² extension includes an enlarged security search area for departing passengers, which will boast a total of 12 security lanes when complete. The first phase saw the opening of the first five lanes with a further five coming on line at the end of July. A further two lanes, including a dedicated Fast Track zone, will open later this year.

A pre-boarding preparation area provides a new space for passengers to get their belongings ready for screening, and an automated tray return system with extended conveyor belts will streamline the process through metal detectors, x-rays and security scanners. All of this will take place against the backdrop of Europe’s largest digital wall, measuring 46ft in length and displaying a mix of information on overseas destinations and short films.

While the priority of this first phase of development is to address bottlenecks for departing passengers, an enlarged baggage reclaim area, customs facilities, and meet and greet area will be completed by the end of 2016, also enhancing the arrivals experience. Completion of the current extension will then enable the immigration hall to be developed in 2017, including the installation of up to 10 of the latest e-passport gates. The terminal extension forms part of an ongoing development plan that will eventually expand the capacity of the airport to 10 million passengers per year.

Robert Sinclair, CEO at Bristol Airport, said, “We want to make Bristol Airport the first choice for passengers across the southwest of the UK by combining world class facilities with West Country hospitality. This terminal extension raises the bar for regional airports by combining a spacious feel with the latest technology and a real sense of place.

“Seven million passengers use Bristol Airport every year, but the same number again travel to airports in the Southeast in order to fly. By providing an even better local alternative we can generate time and cost savings for travelers while freeing up capacity in the congested London airport system.”