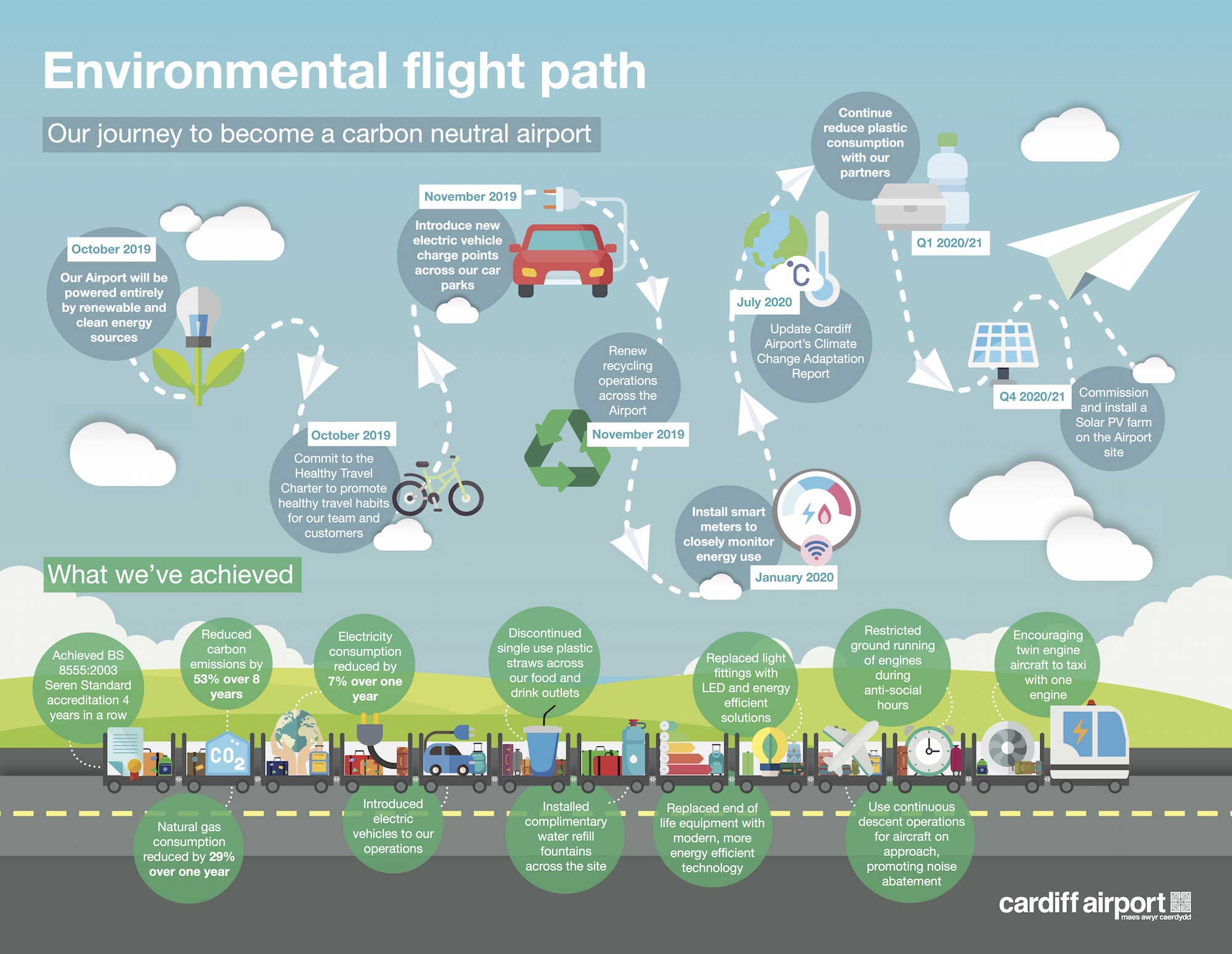 The national airport for Wales has unveiled a timeline of immediate and short term environmental goals. These milestones will be delivered in line with the organisation’s vision to become a ‘Carbon neutral Airport’ and is a key consideration for the Airport’s Masterplan development over the next two decades.

Environmental responsibility is a priority for Cardiff Airport, with a number of achievements already having been delivered.

Cardiff Airport’s Environmental Flight Path has been developed with the support of Cardiff Airport’s Board, Welsh Government, the Airport Operators’ Association and WSP consultancy. It is a framework developed to track environmental and sustainability successes that have already been achieved, whilst setting our immediate and short term goals. These include:

Deb Bowen Rees, CEO of Cardiff Airport, said: “The unveiling of our Environmental Flight Path is the culmination of a huge amount of work delivered by the team. I’m extremely proud of the significant achievements we’ve already made, which includes a reduction of over 50% in carbon emissions over eight years. In October, we will be able to say that all of the Airport’s power supply will be sourced from renewable and clean energy.

“Our Environmental Flight Path will continue as a living and breathing strategy which will be used as a benchmark for success but, importantly, it will be reviewed and expanded over time to include mid and long-term goals as we move through the next twenty years and realise our Masterplan for 2040 and ultimately become a carbon neutral Airport.”

Connectivity is hugely important to Wales for both business and leisure travel – by choosing to fly locally from Cardiff Airport it will have a positive impact on the carbon footprint of travellers who may otherwise be travelling to and from English Airports via road.

How are our airlines doing?

Cardiff Airport works with closely with a number of well-known airlines, who are playing their part to promote awareness of climate change and taking steps to operate their business sustainably.

Just last week, it was announced that Air France-KLM is back at the top of the ‘Airlines’ category of the Dow Jones Sustainability Index (DJSI). KLM, which operates up to three times a day from Cardiff to its hub at Amsterdam Schiphol, has significantly invested in sustainable fuel and technology and in June launched its “Fly Responsibly” initiative.