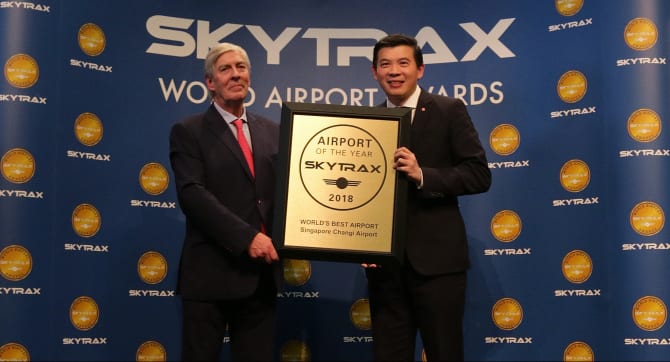 Changi Airport Singapore achieved great success at the 2018 World Airport Awards, being voted by air travellers as the World’s Best Airport for the sixth consecutive year. This is the first time in the history of the awards that an airport has won this prestige title for six consecutive years.

Changi Airport was also the repeat winner of the award for the Best Airport Leisure Amenities. The awards were held at Passenger Terminal EXPO in Stockholm, Sweden on 21st March 2018.

Mr Lee Seow Hiang, Chief Executive Officer of Changi Airport Group said, “We are extremely honoured to be named Skytrax’s World’s Best Airport for the sixth consecutive year. It is a significant achievement for Changi Airport and spurs us to continue to deliver the best passenger experience for all who travel through Changi Airport. Last year, we successfully opened Terminal 4, and upgraded parts of Terminal 1. We are most grateful to the 50,000-strong airport community for their steadfast support through the years and as we continue to upgrade the airport’s infrastructure. Their unwavering commitment and passion for service excellence are what underpins Changi Airport’s success.  As we anticipate the opening of Jewel Changi Airport next year, we will continue to work closely with our partners to deliver the best of experiences to our passengers. We thank our passengers and partners alike for their continued support and confidence in us.”

Mr Edward Plaisted, CEO of Skytrax said: “To be voted the World’s Best Airport for the sixth consecutive year is fabulous achievement for Changi Airport, and this award yet again demonstrates the airport’s popularity with international air travellers. Changi Airport is very focussed on making the airport experience comfortable and convenient, and continues to innovate with new product and service features. Being named the World’s Best Airport provides great recognition for every member of staff at the airport who contribute to Changi Airport’s success.”

Changi Airport also received the awards for the World’s Best Airport Leisure Amenities, and the Best Airport in Asia.