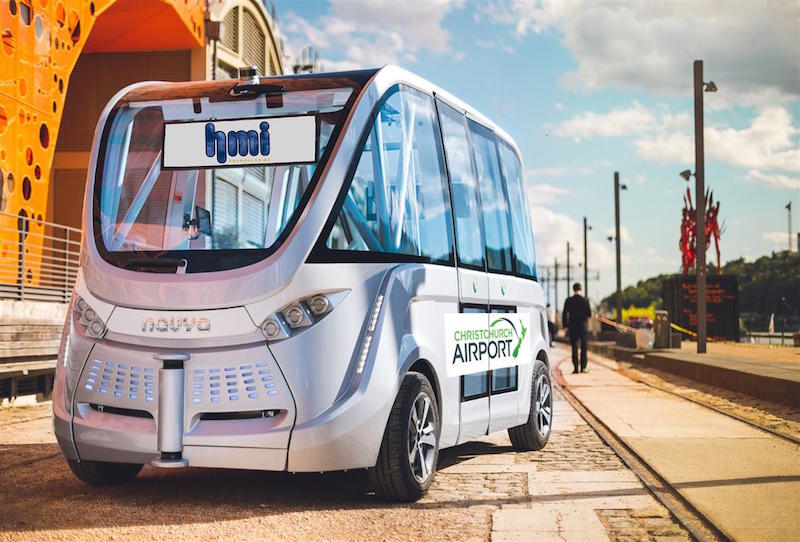 HMI Technologies and Christchurch International Airport have agreed on the New Zealand based and funded trial, which is focussed on finding answers to key questions about how these vehicles could operate in this country.

The trials will largely be conducted on the Christchurch Airport campus, starting on private roads with no public present, with the long-term aim of moving to public roads once the safety case has been made and all regulatory approvals are in place.

HMI Technologies has bought a French Navya 15-person shuttle for the trial.  The vehicle is fully autonomous, has no steering wheel and is electric powered. The vehicle is expected to arrive in Christchurch before Christmas, with the trial scheduled to begin early in 2017.

“We hope to eventually see autonomous vehicles operating in and around the airport. Before that could happen, we want to understand the infrastructure and operating requirements for these vehicles, to understand the human/technology interface and to build the safety case for autonomous vehicles on our campus. The trial vehicle being electric also fits well with the airport’s sustainability objectives,” says Mr Singleton.

Managing Director of HMI Technologies, Mohammed Hikmet, says his company and the airport share an interest in New Zealand being an early adopter of these vehicles.

“Both companies are keen to exploit the opportunities autonomous vehicles present New Zealand. I am proud our New Zealand company is taking a lead in initiating the first trials of this vehicle in this country. We see huge possibilities for companies like ours to develop solutions and applications for use with autonomous vehicles.”

Former Secretary for Transport, Martin Matthews, is overseeing the trial and describes it as very significant.

“Autonomous vehicles are coming, whether we are ready or not, so we are taking the initiative to be ready. Many people believe we are years away from seeing these vehicles on our roads, but I disagree. I believe they will be with us very soon, so it’s important we understand what is required for them to operate safely here.”

The trial partners will work with University of Canterbury researchers and developers, who will help design and undertake the trials. Christchurch City Council will also use the trials to raise awareness of how these vehicles and other technological developments may alter the way cities work in the future. The Ministry of Transport and New Zealand Transport Agency will also be involved in the trials.