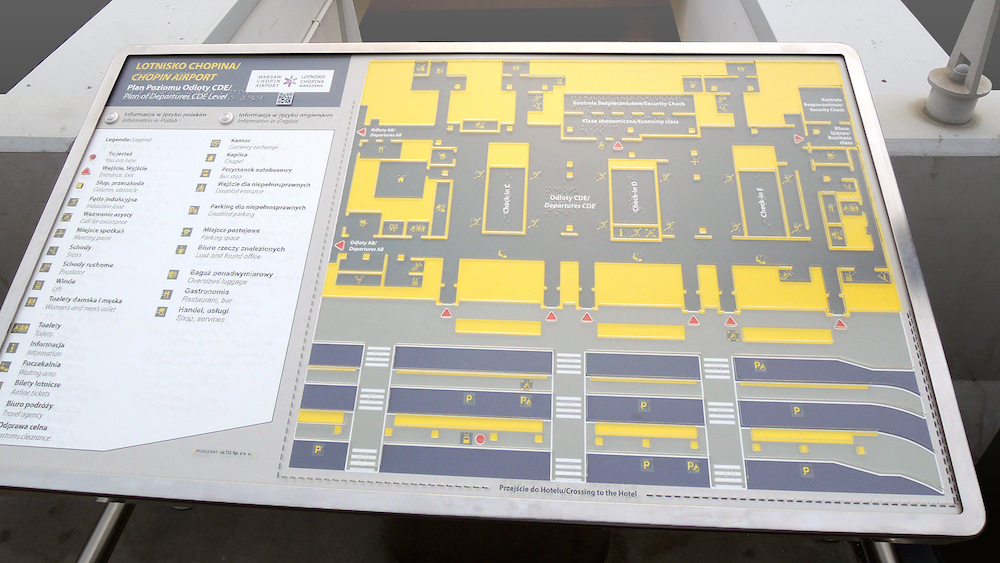 They are modern, innovative and practical. We are talking about the new airport maps, which can be touched and are equipped with audio information – so-called typhlographic terminals, that will help everyone find their way to the selected destination.

Chopin Airport currently has four such terminals, which can be found in front of the departure hall, at the bus stop at the departure hall, in front of the arrivals hall and at the Chopin Airport train station. The project was carried out in cooperation of the airport with the experts from Chance for the Blind Foundation.
Typhlographic plans were made using cutting-edge technology and are a permanent element supporting communication at the airport. Voice messages in Polish and English can be played using special buttons. After pressing the button, the user will hear, where the most important objects in her or his environment are, in which direction she or he should go and where she or he can get help.

Castings of the typhlographic plans are made from a combination of transparent resins placed on a coloured imprint. This technology has been used in Poland for the first time. Thanks to its characteristics, the cast is pleasant to touch, and at the same time is highly resistant to mechanical damage. This is important because they are typhlographic plans, which have convex lines representing the walls, paths, symbols, objects, descriptions in Braille or buttons that anyone can touch. Plans have been prepared primarily for the blind and visually impaired people. Also the choice of colours is not accidental. They have been selected, so the visually impaired, elderly or suffering from colour blindness could easily interpret what is on the map.

The producer of the plans, the company Altix, is the market leader in the fight against digital exclusion of blind people. For more information about the application visit the manufacturer’s website: www.altix.pl.