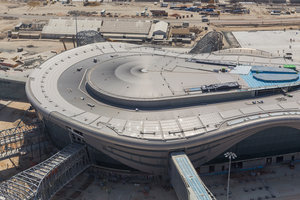 Airport operator Abu Dhabi Airports has today (June 22) completed the final de-propping exercise of the last arch in the roof of the new Midfield Terminal Building (MTB) at Abu Dhabi International Airport in the UAE.

The de-propping process took three days with 90 jacking points used around the building for support. The last stage released 8,000 tons of weight onto the roof, which weighs 21,000 tons in total, meaning that the structure is now completely self-supporting. During the next few months, Abu Dhabi Airports will begin building the stand-alone retails units in the duty-free area of the building.

Sulaiman Al Siksek, chief programs officer at Abu Dhabi Airports, said, “Now that the complex process of de-propping the roof structure has been completed, the construction team has started clearing the 50 support towers under the roof, which will take them another four to five weeks.

“In the meantime work can now begin on the exterior enveloping of the front façade and on the preparation necessary for the interior work on the central processor.”