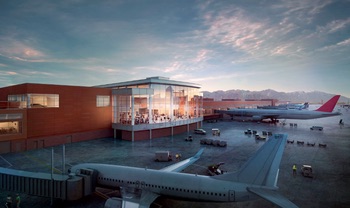 The Salt Lake City Department of Airports has announced that the budget for the Terminal Redevelopment Program (TRP) has increased by $350 million primarily because of rising construction  and labor costs.

Estimated construction costs for the entire redevelopment program, which now includes the North Concourse, are estimated at $2.9 billion as of November 2016. Salt Lake City and Utah’s robust construction market has resulted in bids for labor and materials coming in higher than originally estimated in the spring of 2015.

“Utah is enjoying a very strong economy, which is resulting in severe labor constraints and a substantial increase in the cost of materials,” said Airport Advisory Board Chair Igor Best – Devereux.

“Because of the checks and balances that the Department of Airports has in place, the Airport staff was able to identify and validate the cost increases early on in the process. This enabled them to take the measures necessary to move forward and seek the required budget approvals.

”The Airport budget and TRP increases were reviewed by the Department of Airport’s Advisory Board at the September and October public meetings. According to the Airline Use Agreement, the added costs also required airline approval, which was received in September. The Salt Lake City Council will discuss the budget amendment during a work session and public hearing on Dec. 6.

The City Council is expected to vote on the budget amendment Dec. 13. The Department of Airports currently has signed contracts for almost 80 percent of the first phase of the TRP, which means these costs are locked in for the duration of the construction.

The TRP will be paid for by Airport revenues, including Airport surplus funds , passenger facility  charges, rental car facility charges, federal grants and revenue bonds. No local tax dollars will  be used to fund the TRP. The TRP will replace the Airport’s aging passenger terminals, concourses and related facilities.

Construction crews recently completed a major milestone with the installation of 7,640 underground stone columns. The first steel pile was driven into the ground in mid – November,  which marks the start of above – ground construction. Future phases in clude the South Concourse – East and the North Concourse, which will go out for bid later in the program.