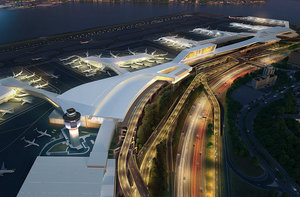 US officials have broken ground on the new US$4bn Terminal B building at LaGuardia Airport in New York. Vice president Joe Biden, New York governor Andrew Cuomo and several other US dignitaries attended the official ceremony as construction work got underway on the 1,300,000ft², 35-gate facility.

The LaGuardia Gateway project will unify the airport’s terminals by demolishing the existing Terminal B building and replacing it with a larger structure that joins terminals C and D.

The groundbreaking ceremony follows the execution of a lease agreement between LaGuardia Gateway Partners, a consortium of developers undertaking the project, and the Port Authority of New York and New Jersey, the owner of the airport. Terminal B will open to the public in 2018, with full completion scheduled for the end of 2021.

Speaking at the event, Governor Cuomo said, “LaGuardia is a key driver of New York’s economy and transportation network, but for far too long it has been outdated, overcrowded and unworthy of the Empire State.

“Today, we are not just breaking ground – we are building an entirely new LaGuardia and transforming it into a world-class transportation gateway for the 21st century. This state has always been built to lead and now that legacy continues with this unprecedented project that will drive growth and generate continued prosperity for generations to come.”