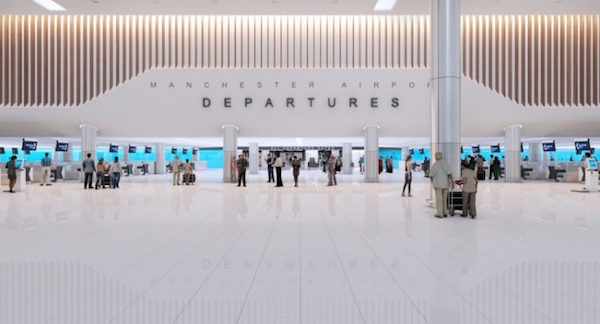 Manchester Airport has begun work on its 10-year, £1 billion transformation programme, which will deliver a major boost to UK’s growth prospects and international competitiveness. This projects will reinforce Manchester Airport’s standing as the UK’s global hub in the North of England, enabling better and more international connections and supporting economic growth across the North.

During the inaugural event on 21st July, Charlie Cornish CEO of MAG, enthused: “Today marks a significant moment in the history of Manchester Airport and demonstrates the confidence that we have in the long-term future of both the North and the UK economy. This is the largest private investment that has been made in the region for some time and the increased connectivity that it will deliver will enable it to become one of the most accessible and productive regions in Europe.”

The event was attended by the Secretary for Transport, Chris Grayling. He visited the airport on the day that the Government launched consultation on its Aviation Strategy which will seek to set out a vision for UK aviation over the next decade and include proposals for how best use can be made of existing runway capacity at airports like Manchester, London Stansted and East Midlands.

“Our new aviation strategy will look beyond the new runway at Heathrow and sets out a comprehensive long-term plan for UK aviation.” commented Chris Grayling, Secretary of State for Transport. “It will support jobs and economic growth across the whole of the UK. I welcome Manchester Airport Group’s £1 billion programme to double the size of Manchester Airport’s Terminal 2 which will create 1,500 jobs. This is great news for the local economy and for passengers who will be able to fly to more destinations, more often.”

The Manchester Airport Transformation Programme (MAN-TP) will provide millions of passengers and airlines with facilities that combine state of the art services with excellent customer service. Once the development is complete, the airport will be able to grow alongside a thriving northern economy to handle 45 million passengers a year, an increase of almost 20 million compared to today.

Cornish added: “It has never been more important that people and businesses across the whole country have easy access to global markets and our investment in transforming the airport will do this for the 25 million people who live within two hours of Manchester Airport.”

Moreover, MAN-TP will enable the airport to further improve the North’s international connectivity and the airport is currently targeting expanding its route network into North America, the Gulf, Asia, Africa and Latin America.