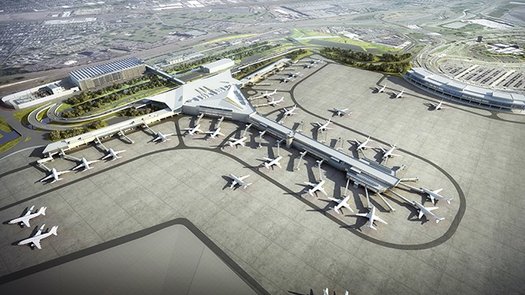 The Port Authority of New York and New Jersey (PANYNJ) has issued requests for proposals (RFP) to three private development teams for a design-build contract for the new Terminal A facility at Newark Liberty International Airport.

The three firms have been asked to submit proposals for the design and construction of the new Terminal A by early fall, with the selected team expected to be chosen by the end of the year.

The RFP marks an important step forward in the replacement of the undersized Terminal A with a modernized facility that meets current and future passenger needs. Terminal A will include 33 gates, a 3,000-space parking garage and related infrastructure improvements. It is scheduled for a partial opening in 2020, with project completion in 2022. The redevelopment program is expected to create 9,000 jobs and US$600m in wages.

The new Terminal A will have the capacity to accommodate 13.6 million passengers annually, while retaining the flexibility for future growth and expansion, and the ability to serve larger aircraft. The current facility, opened in 1973, was designed to handle a maximum of nine million passengers per year.

Pat Foye, executive director, PANYNJ, said, “The Terminal A project underscores the Port Authority’s commitment to the modernization of Newark Liberty Airport, along with the redevelopment efforts ongoing at LaGuardia and John F Kennedy International airports. The use of design-build for this project highlights our commitment to use project delivery mechanisms that incentivize innovative ideas and transfer project delivery risk to the private sector where it makes sense. The agency allowed its aviation facilities to fall behind the times in recent decades, but this initiative is a critical part of our recommitment to modernizing our airports.”