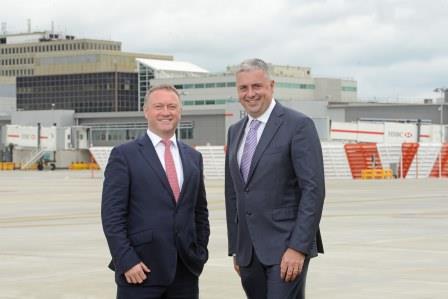 Gatwick marked its busiest-ever May today (+5.8%) by launching its new Pier 1 facility – one of largest projects the airport has ever undertaken (£186million) – which houses an entirely new baggage system for the South Terminal and state-of-the-art passenger gate rooms with views across the runway.

The new ‘operationally excellent’ facility replaces the old Pier 1 – which was originally opened by the Queen in 1958 – now also contains the airport’s first early bag store.  The bag store allows up to 2600 bags to be checked up to 18 hours before departure – an initiative that improves convenience for passengers and also reduces queues by spreading out check-in times.

Four new taxiways have also been constructed – reducing delays on the airfield – with new dual boarding facilities reducing queues at the passenger gates.  A new lounge for premium passengers sits on top of the new Pier and boasts panoramic views across the airfield.

“Our new Pier 1 supports Gatwick’s mission to become London’s airport of choice and helps the airport on its journey to become one of the most efficient in the world.

“These new state-of-the-art facilities make it easy for airlines to choose Gatwick as an operating base and means our passengers will enjoy even better customer service.

“It is just this kind of efficiency that Gatwick would roll out en masse if we get the green light to expand.  The UK must realise the potential of expansion and choose a second runway at Gatwick because it is the only option that can actually be delivered.”

“I’m delighted to open this fantastic new facility and celebrate the hard work and dedication that has gone into making it a reality.

“Gatwick plays a vital role across the region and expansion would help accelerate Croydon’s potential as the growth engine of South London.  I look forward to hearing a decision soon in favour of building a new runway.”

More than a quarter of a million passengers flew from Gatwick to destinations in North America in May – with a significant number taking advantage of the new 28 weekly flight schedule Westjet launched at the start of the month.   The month’s figures took Gatwick’s moving annual total passenger numbers to 41,123,000 – a new world record for a single runway airport.

The new baggage system – can accommodate over 4,250 bags per hour and will service the whole of the South Terminal.  The new baggage hall has also been built with staff in mind, with better consideration to manual handling benefitting the health and safety of those working in the baggage hall.

The airfield – all stands have a choice of an airbridge or walk-in, walk-out with possibility to use both to speed up the boarding/ disembarking – helping eliminate queue’s and ensure more on time departures. This also allows airlines to run their operation how they choose.

Four new taxiways provide nine extra holding points for aircraft – also reducing delays by improving the efficiency of aircraft movements to and off the stands.