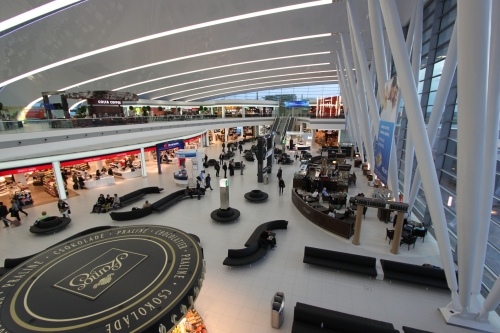 Budapest Airport claims that its revamped retail and F&B offerings in its re-modelled SkyCourt is proving a big hit with passengers this summer.

Around 6,000sqm of outlets – 50% of the commercial areas in SkyCourt – have been upgraded or renewed since winter 2015 in a move the gateway claims has “significantly reinvigorated” the area and boosted sales.

According to the airport, one of the hits of the summer at the airport was the opening of the Spanish Desigual fashion store in SkyCourt.

The unit at the airport has already proven popular among passengers with time to browse the merchandise before departure, particularly during summer sales.

In addition, on the left-hand-side of SkyCourt’s mezzanine, one of the prime locations offering a great view of the airfield, a specialist sports bar – O’Leary’s – was opened before Euro ’16.

With 25 screens, guests can follow sports events around the world, as well as watching the domestic sports channels on offer.

O’Leary’s is a new brand in domestic F&B, joining other popular Irish places, offering a sporty vibe as well as a wide selection of beer and hamburgers on 270m2.

Tashba – an acronym resulting from combining the Spanish word ‘tapas’, the Japanese ‘sushi’, and the word ‘bar’ – opened in the spring in the middle of the ground floor of the SkyCourt.

This year Swarowski has welcomed passengers at a new location, with an independent branded store. The Innsbruck-based company, known for its jewellery and crystals, opened its 38m2 unit in the passageway leading to the boarding gates of Terminal 2A.

The specialised ‘watch island’, occupying an area of similar size in the boarding zone of Terminal 2B, is a novelty essentially for Non-Schengen passengers where customers due to fly to Canada, Qatar, Dubai, Russia, or Turkey, can pick up international brands including Tissot, Longines, Oris, Certina, Police, Swatch, or Lacoste.

At the heart of Budapest’s retail is Hungarian Duty Free, established by Hamburg-based Heinemann, attracting passengers with its traditional duty-free unit on 1500m2 as well as branded stores such as Tommy Hilfiger and Hugo Boss.

Heinemann also operates the only Victoria’s Secret boutique in Hungary at the airport.

“This year we took a major step in renewing our retail and F&B offer, something we aim to continuously keep up to date and relevant,” says Budapest Airport’s chief commercial officer, Kam Jandu.

“We’ve increased the numbers of transactions in all outlets, even more so than the passenger growth numbers, showing us that passengers are more satisfied than ever as we respond to changing trends in fashion, retail, and gastronomy.

“One of the objectives of our BUD:Shopping promotion started this year – to make passengers realise that it is worth coming to the airport earlier.

“We’ve succeeded in giving our customers a pleasurable environment to browse in, amongst world-class products representing excellent value, which are often unique to the airport.”